Mr Pip: and some things and people who give me the pip

Posted on November 9, 2013 by Nicholas Gruen 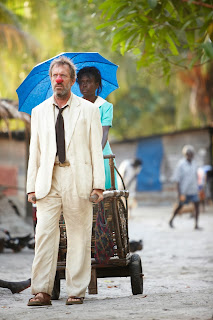 Heaven knows we need never be ashamed of our tears, for they are the rain upon the blinding dust of earth, overlying our hard hearts. I was better after I had cried than before – more sorry, more aware of my own ingratitude, more gentle.

I went to see Mr Pip last night. I checked out several reviews before I went and they were not encouraging. But I liked the sound of the story and wanted to go to a movie and so there I was. I recommend it – though readers are warned that I am prone to strong views when seeing movies – particularly when I see them on my own which I did with this one.

It’s a film made in New Zealand and I have to say that based on a number of New Zealand films I’ve seen – most particularly Once were Warriors and In my Father’s Den these New Zealanders seem to be much better than us at making serious movies lately. Ours are so timid by comparison – so often focused on fairly cute comedies of manners – like Priscilla and Muriel’s Wedding and usually bathed in the treacle of our national preoccupation with asking “what does it mean to be Australian?” – sorry I nearly lost consciousness just contemplating that last question. Such an interesting one. Note: Henry Lawson and cousin Banjo were no doubt good guys, but can we please move on?

Anyway perhaps because it has no great stereotype of itself as Australia does, New Zealand movies seem much more at home with big serious things. Mr Pip is an epic story – set in civil war torn Bougainville. The clapped out Mr Pip is the only white person left on a small island. With the local school closed down owing to the troubles, he becomes the teacher. His lessons consist or reading from Dickens Great Expectations. Matilda, a charismatic 14 year old girl in the class, is transported by this story.

We only have fragments of the characters and their back stories, but it’s fairly clear that the plot of Great Expectations is a motif for the stories of the people in the movie.  Mr Pip says that it changed his life. And of course Great Expectations is about someone who is a migrant from a lower to an upper class world. Everything remains strange to Pip and the great achievement to the film is it’s capturing the strangeness of life as it is, and as it should be.

The one quote from Dickens’ book which figures in any important way is the one I have excerpted above. It speaks for itself, and for the film. It’s of a piece with this line from CS Lewis: “Literature . . . irrigates the deserts that our lives have already become”. Strange things happen all the time and the strangest are resolved in some sense by the end of the movie, but not really in a way that dissipates the strangeness as they might if they were the tying up of the loose ends at the end of a whodunit.

In addition to this grand theme, played out on an epic scale, the film avoids the clichés which, in Australian films are as obligatory as acknowledging the traditional owners of the land on which we meet their elders past and present. The natives are not noble savages – just people who are strange, but no stranger than anyone else.

Meanwhile Sandra Hall who gave it three and a half stars sums it up by saying “It’s not a perfect film but it’s not often you get one that sings literature’s praises so eloquently, and that makes up for a lot.”  Well actually it didn’t occur to me that it was “singing literature’s praises” which sounds pretty precious to me.  It was imagining and presenting a big story. That story, it seemed to me was about the strangeness of life and the chief way in which this was presented was via the various characters necessarily “reinventing themselves” as we say these days, as they migrated into, and had to make homes in new worlds. Mr Pip on the island, Matilda who had to get off the island and Pip from Great Expectations who becomes a gentleman – as best he can.

I have no objections to Jake Wilson’s much less pretentious summing up other than the ‘mark’ he gave it (two and a half stars):

Like many films based on modern ”literary” novels, Mr Pip is a puzzle with a significant number of pieces missing. But though largely incoherent, it’s also strangely moving.

Adamson aspires to the sweep of a director like David Lean, favouring broad, obviously cued emotional effects. Yet he’s also willing to acknowledge the unbridgeable gap between one person’s experience and another’s.

I would say however that life is ‘incoherent’ – and also, one hopes, strangely moving.

Anyway, I’ll leave it there, except to say that, as I sat through the movie I gradually became increasingly incensed at the dreadful review given it by the ditzy Margaret and her patronising sidekick David who almost invariably expresses his opinions as simple facts. Can we please get these people off our airwaves?

DAVID: This adaptation of a novel by Lloyd Jones [is] a very peculiar affair, and a rather indigestible mixture of styles.

Much of it seems aiming to be rather quaint, as the seriously odd Mr. Watts takes over the school and charms everyone. Then, when the bad guys – the military – mistakenly think the character of Mr. Pip is real and a rebel to boot, things get out of hand and, at least by implication, unsettlingly violent. The last part of the film, involving Kerry Fox in London, goes off in yet another direction.

The clashing moods are jarring and tend to reduce the impact of young Xzannjah’s winningly unaffected performance as Matilda. The location photography is fine.

MARGARET: Yes, I think it’s one of the advantages of the film that he chose to shoot it on Bougainville so in the locations where there story is meant to have taken place.

MARGARET: Yes. I don’t imagine that was particularly easy.

DAVID: Logistics would have been difficult.

MARGARET: I agree with you, I think young Xzannjah, however you pronounce her names with all those xes and zeds in it, is terrific.

MARGARET: Yes. But there are things in it – this guy walking through this village with a red nose dragging his wife in a cart.

DAVID: What was that all about?

MARGARET: I do not know and it’s so odd and maybe in the book that is contextualised but it’s not at all in the film and so you go where’s this coming from? Similarly, there are plot points in the film, the explanation of Mr Pip on the beach. It’s a very odd film.

DAVID: All those strange scenes in fancy dress. I mean her imagining of that.

MARGARET: That sits rather oddly too.

DAVID: Uneasily, yes. I think so.

DAVID: I’m giving it two and a half.

Anyway, I’m not suggesting that my review is particularly ‘objective’ whatever that might mean for an exercise like this. I thought the film was the real deal – a morally serious and competent engagement with its subject.

PS: Here’s a good review of the movie by a New Zealand reviewer.

This entry was posted in Films and TV, History, Literature. Bookmark the permalink.

28 Responses to Mr Pip: and some things and people who give me the pip