Posted on December 5, 2007 by Nicholas Gruen 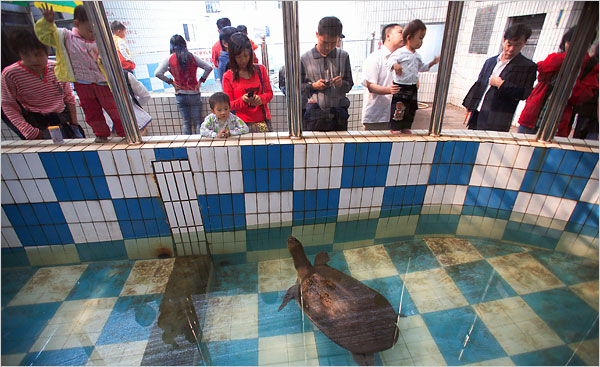 From Crikey! linking to the NYT. Unnoticed and unappreciated for five decades, a large female turtle with a stained, leathery shell is now a precious commodity in this citys decaying zoo. She is fed a special diet of raw meat. Her small pool has been encased with bulletproof glass. A surveillance camera monitors her movements. A guard is posted at night. The agenda is simple: The turtle must not die. Earlier this year, scientists concluded that she is the planets last known female Yangtze giant soft-shell turtle. She is about 80 years old and weighs almost 90 pounds. As it happens, the planet also has only one undisputed, known male. He lives at a zoo in the city of Suzhou. He is 100 years old and weighs about 200 pounds. They are the last hope of saving a species believed to be the largest freshwater turtles in the world.

Are they capable of mating at this age? I sadly doubt it.

Hopefully, in the few years these creatures have left, science learns enough to bring the species back from (or beyond) the brink.

The words to this post are actually cut from the linked article (not Nicholas’ words as it appears here).

We may as well begin to get used to ‘issues’ within and about China. The linked article is illuminating – in that we’re probably pretty incognisant about what’s going on there, with best wishes to those who are knowledgeable – and worth a few moment’s read, including that it touches on matters we are dealing with here, environmentally/commercially, and provides a bit of perspective on what China has been and is now about.

If China’s really concerned about this issue, it could pony up few million to have the Venter Institute sort out the turtle’s genome code.

Then down the track, it could be cloned. With just a hint of lemon grass and black pepper.

“Are they capable of mating at this age? I sadly doubt it.”

Sounds like a job for Barry White and the Cialis Singers.