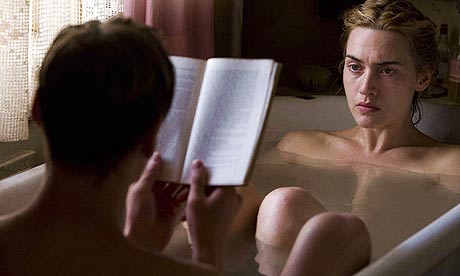 I’ve just been to see the film, and I’m afraid I wasn’t impressed.  It is of a piece with ‘Doubt’ which is very well acted but has a slick and ultimately superficial script.

I had no idea what the film was about but somehow by osmosis I took in that  it was a Good Film and I wanted to see a film so I went to see it.  [Spoiler alert]

I didn’t know the holocaust wends its way rather definitely into the film and as some readers may remember, I think the holocaust is well nigh impossible to bring off in art or pretty much any re-creation.  Still, I watched and wondered, and didn’t wait for it to fail.

Essentially we are presented with a portrait of a haunted woman who has participated in horrible attrocities. This is all fair enough. I’m not against ‘humanising’ the perpetrators of attrocities. Rather the opposite.  But you see that’s where the difficulty lies. If you want to do this, you’ve got to know what you’re doing.  It’s dead hard – not in the sense of doing it according to acceptable standards of taste and decorum – which have no trouble looking after themselves.  It’s dead hard, because we don’t really know what goes on in the heart of such people.  I expect there are some good primary sources, but I don’t know them, and I don’t really know any bits of art that take them up – but there may well be some and I’d be interested to know if anyone can suggeset any (though I’m not offering to rush out and check them out.)

In any event, the problem is that we get this sympathetic portrait of the perpetrator of the attrocities, but we’re not really left any wiser as to what the hell it was all about when she did it.  She seems a better sort than all the other mass murderers. She’s as honest as the day is long and has been merciful to our hero. She helps and saves people, gets them to read to her in the camp.  But then she sends them to their deaths in the next ‘selection’.  This is all very unsatisfactory because it’s a complete mystery to us what is going on here.

Now that might work out OK I guess. In a sense this becomes a ‘point’ of the film.  But it’s not very enlightening, and becomes a kind of set piece bit of drama, a vehicle for virtuoso acting.  Kate Winslett is supposed to be a fave for an Oscar from this.  I can’t fault her acting.  It’s very good.  But then again all it has is a kind of static or superficial verisimilitude – because it cannot have any deeper verisimilitude because there is no deeper truth in the script.    I also discovered to my shock that David Hare was the screen-playwright.  Now I think he’s written some terrific things – like Plenty, Skylight and something else the name of which I can’t remember. I recognised it as a Hare film when I saw his name.  He has what I’d call a ‘courtroom drama’ style where your sympathies move back and forth as you try to figure out whose side you are on.  But unlike some of his other plays – Plenty and Skylight being two – you don’t really go anywhere towards figuring anything out.

I’ve looked up two reviews, the first is good, but for me the second review really ‘nailed’ it – as Marcia would say on Australian Idol.

The end is handled particularly badly as explained by the second review.

In a final scene, Ralph Fiennes, as the older Michael, comes to New York to visit Ilana Mather, one of Hanna’s [the perpetrator of the attrocity’s] surviving victims, bearing Hanna’s savings in an old tea-can. (Alexandra Maria Lara plays Ilana as a young woman, with whom young Michael had exchanged a friendly grimace of sympathy in court; she is played in middle age by Lena Olin.) This is because Hanna wanted Ilana to have her money, to do with “as she wishes”. Surely any sentient human being, no matter how burdened they might feel by a perverse obligation to carry out Hanna’s wishes, would see what a grotesque insult that is? Michael’s failure to acknowledge it is one of the most agonising, toe-curling aspects of the film.

He explains Hanna’s illiteracy to Ilana and the woman asks sharply: “Is that an explanation? Or an excuse?” This highly pertinent question never gets a satisfactory answer from Michael or anyone else. Ilana does not take the money, but incredibly, she does accept the battered old tea-can because it resembles one she lost in the camps – thus legitimising this appalling payment in a far deeper, more emotional sense. The sheer fatuity of this exchange left me gasping.

Kate Winslet thus participates in the Hollywood tradition of having the Nazi played by a Brit; she is very good, and in fact no purely technical objections could conceivably be levelled in any direction. But I can’t forgive this film for being so shallow and so obtuse on such a subject, and I can’t accept it as a parable for war-guilt-by-association suffered by goodish Germans of the next generation. Under the gloss of high production value, under the sheen of hardback good taste, there is something naive and glib and meretricious. It left a very strange taste in my mouth.

This entry was posted in Art and Architecture, Films and TV. Bookmark the permalink.
Subscribe
Login
4 Comments
Oldest
Newest Most Voted
Inline Feedbacks
View all comments

Did you ever read the book? Some of those weaknesses you identify in the film can be found in the book – although one needs to factor in translation issues. It is essentially the broader theme of Germany’s post-Nazi guilt which underlies the story – and the associated complications for families and inter-generationl blame that it ignites – which is addressed somewhat problematically. Michael may have failed a number of “life tests” but there is generation of Germans who failed a far bigger one.
Schlink’s novel addresses this issue somewhat obliquely and therefore seems a bit feeble in its moral judgments. But that’s the beauty of literature!

To me there were no great mysteries in the book – simply a questionable handling of obvious moral failures. (On the other hand, those amongst us who have never directly experienced such a situation, like myself, can only but imagine what was being faced by that generation and should not, perhaps, be too judgmental.)

You have also put me off seeing the film!

I wasn’t being judgemental of anyone (other than the people who made the film). I haven’t read the book so thanks for your input.

I’ve not seen the film, but I did think the book was good when I read it. That said, ennui is right that it probably fails to convey its ‘larger message’. I did get a very strong sense of the difference in choices for those who can read as opposed to those who do not, something that is easy to forget.

While not the focus of the interview, Schlink said he was very happy with the film.