Promising budget surpluses years out is a mug’s game . . . 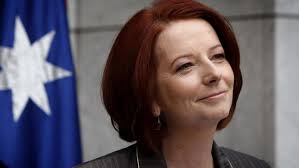 Yes folks, Julia Gillard is softening that story about how she’s gonna achieve a budget surplus by 2012/13. Arguably it makes sense if there’s a huge bill from the floods, but now the fun starts. A bit like the anxious months when we waited for Wayne, Lindsay, Julia or Kevin to use the D(eficit) word in 2008, likewise we’ll have the usual hysteria around the issue.

Now far be it from me to say that, having failed to defend itself against allegations of waste and ‘spending like a drunken sailor’ the government didn’t need to promise something that kept itself fiscally nice to get it over the line at the last election. And that’s why if the government had set up an independent fiscal advisory board in its first term it could have finessed a lot of the problems it had then.

And having not set up one, it could have finessed a lot of its problems in crafting a minimum regrets election promise by promising to set one up and then to take its advice. Now it will all turn into a circus. Pity. An avoidable pity. Perhaps it’s not too late . . . who knows.

I agree that setting up a Fiscal Advisory Board would have been good politics because it would have got them off the hook of their own foolishness about so-called “fiscal conservatism”.

But whether it’s good policy is another question, which we’ve argued elsewhere.

whoops sorry about the tags – please close them for me.

Done – you used ‘strong’ as your initiate command and ‘b’ as your / command.

I was thinking about this today DD, and I was thinking this. The need for this kind of thing was hugely in evidence lately as the Government did what its bureaucrats told it to do (in terms of general fiscal ‘envelope’ as they seem to say these days) and then spent most of it’s time trying to prove that it was following someone else’s advice. The arrangements didn’t support that, so it was all a bit of a mess.

I think you can disagree with the extent of independence, but we have independent advice on all sorts of things. I was wandering through Parliament House today and saw the Annual Report of the Electoral Commission. Yet another body where we set up some institutional place for public, independent advice to go to government. We can all see the sense in this (I hope). It’s quasi separation of powers. Ultimately the pollies get the say but they get public independent advice.

But somehow it’s different in fiscal policy. We let any old thing happen, and the public decide whether the government has cooked the books – what with the public being in such a good position to do so having had it all sensibly sorted out for them in columns by Piers Ackerman, Ken Davidson, Joe Hockey and Wayne Swan.

Amazing it works at all really ;)

The AEC doesn’t provide advice to government, it simply maintains (independenly) an electoral system mandated by legislation ie The Electoral Act.
But that is probably irrelevant to the point you are making re the political cover provided by a ‘fiscal advisory board’.

What this government lacks is simply courage and an obvious lack of skill in explaining complex concepts to the electorate.

I’m slowly coming to the view that one reason for its failure in exlaining complex issues is its own lack of any intense belief in the policy itself. People perceive that lack of conviction – as the saying goes “in politics the perception is the reality” – and react accordingly.

Although a government should not need ‘policy cover’ – it should be capable of selling it own policies – I would support the creation of source of independent fiscal advice.