The Dunera and modernism in Australia: and an update 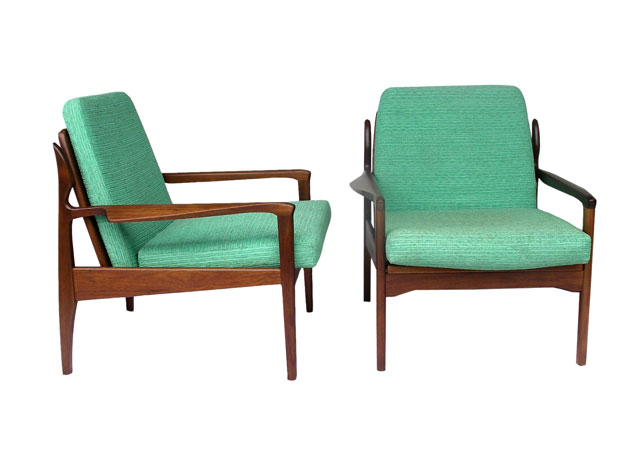 As you may know, the Dunera brought a bunch of people out to Australia who settled in very nicely and added to the place.  A coach of olympic runners, numerous professors, some rich entrepreneurs. I don’t know if Fred Lowen and Ernst Roedeck got rich but they founded FLER and were a great duo – FL being the designer and ER being the engineer.  They brought modernist furniture to Australia – or rather invented it here, because I don’t know how much of it Fred had seen when he was back in Europe. Fred Lowen, who is no longer with us but whom I met once at an opening of his about ten or so years ago was a very nice man to meet.  He’s also written a book.

Ernst is still with us and it’s quite interesting (to me anyway) that at least as he tells the story, the dedication to Australian materials reflected a kind of ‘buy Australian’ as much as an aesthetic sensibility from the start. Ernst feels so strongly about buy Australian that he’s a strong protectionist.  He’s taken the trouble to reconstruct that protectionism to reflect the desirability of exports (arguably what enabled the protectionism of what was formerly developing Asia to become so successful).  I wrote about the policy of ‘balanced trade’ he advocates here when Warren Buffett proposed it for America.  In any event, Ernst thinks we should balance our trade so there you do. No borrowing for him.

Fred Lowen became enamoured of Scandinavian design (I think as much from books and magazines as having seen it) and you can see the lovely result above – his designs are still collected today.

Anyway ABC RN (is there a better broadcaster in the world?) has devoted one of it’s Hindsight programs to FL and ER.

Meanwhile, on the Dunera front, there’s the last of the 70th anniversary celebrations of the Dunera on Sunday May 15th at Tatura if anyone wants to contact me about it – there’s a museum there and all.

And Ken Inglis, Historian extraordinare is writing a book on the Dunera and is giving a lecture on it in Melbourne on April 14th which I hope to attend.  Perhaps I’ll see you there.  He seems to have turned up a very moving painting – or at least someone has posted a painting I’ve not seen. The artist is unknown, presumably an inmate at Hay after about three months in captivity. It looks better than Christmas Island.

The Scandinavian modern has also outlived a cat who utilised one of the chairs as a scratching post. But with new upholstery and a replacement cat, the furniture continues on.

My father, Heinz Bloch, was a Dunera Boy. I’m trying to make any Dunera-related connections I can prior to a visit to Australia for a convention. I’m in Melbourne Sept 19-22 2011, then driving to Hay on Sept 23 and staying the night to visit the museum. I’ve just now learned about Tatura as another place to visit.
Too bad we won’t be there for the 70th Anniversary, but perhaps those events have brought out some folks and/or generated some mailing lists, Facebook groups, etc? I’d appreciate any contact from over there. Thanks!

Hi Dave, this is an old post so not sure you’ll receive this. I was just reading my husbands grandfathers letters written in the internment camp, he was on the Dunera. He mentions in his letter he’s together with Heinz Bloch again, his name was Manfred Lindner :)

Hi Dave, You’re welcome to email me on ngruen AT gmail but I’m not particularly well connected with the Dunera folks. I keep meaning to go to reunions, but don’t seem to make it. I once hovered outside a reunion for a while, wondering why any of them would like to meet me and ended up going home ;)