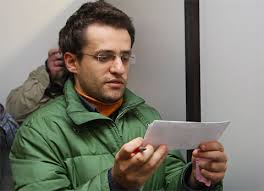 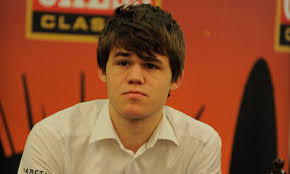 The Candidates is on!  The Candidates is a tournament of the highest ranking chess players in the world (other than the world champion) and the prize is the right to challenge the champ in this case Vishy Anand.  The guy on the left is Aronian who’s expected to win.  And the guy on the right is Carlsen who has been rated most highly of all the players, and mysteriously withdrew from the process. [Sorry for saying left was right – ed.]

You can read about the way the Candidates matches are run on Wikipedia – it changes from time to time. There’s regular reporting on the matches at Chessbase including a report of round one which was last night our time – and yesterday Russian time where the tourney is on. And you can get a live feed of the games here.  Last night the one game that looked like going to a result had Aronian as white and he managed to make a fairly simple calculation mistake in an end game after 7 hours! Anyway, it’s fun to keep an eye on if you’re working away on your computer late at night. Quite distracting actually. Chessdom is particularly useful as it provides computer analysis of the position as you go and for these august games, grandmaster commentary as well. Amazing what you can get for free these days! I’m surprised players don’t make more of the copyright that I presume inheres in their games – though perhaps the tournament operators snaffle the copyright for themselves. Does anyone know what the story is here?

Levon is on the left and vice versa. Best of luck to him too!

Copyright has been a controversial issue. Here is some history: http://www.chesshistory.com/winter/extra/copyright.html and here is the ubiquitous and excellent Tyler Cowen on an attempt to limit broadcasting of the moves during a Topalov match a few years ago: http://marginalrevolution.com/marginalrevolution/2009/03/should-chess-moves-be-subject-to-copyright.html

Thanks Ilya – amazing how quickly the blogosphere comes to one’s aid. I agree with chess games not being copyrightable from a policy perspective, but, following up some of the links you’ve linked to, as a legal matter it’s not the moves that are being copyrighted but their order in a sequence. The words in a play or book are not copyrightable, but the order in which they’re written most assuredly is.