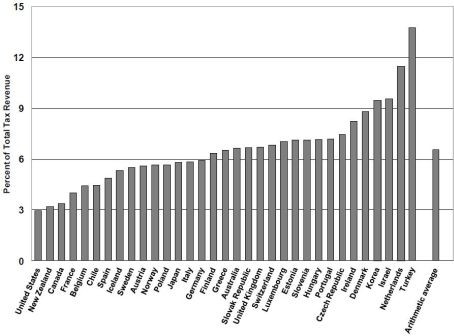 It’s hard to detect any ideological patterns here. The Nordics do a bit better than the Anglosphere, if you correct for their larger than usual tax take (which would mean their green tax revenue would be a substantially higher proportion of GDP than suggested in the graph to the left).

There’s also a few of the more newly industrialising economies on the right hand (good) side of the graph – like Turkey and Korea and the Eastern European countries.  Perhaps they’ve got more advice from economists. Who knows?

But I wish we scored better than we do.

whats “good’ and whats ‘bad’? What is being measured.

But I wish we scored better than we do.

Maybe we should make donations to the ATO tax-deductible.

Incurious and Unread (aka Dave)

Doesn’t this depend upon how “bad” the society is? The “bad demand curve”?

What is it those Turks are getting up to?

“Green taxes” seems a bit vague. Where did the chart come from? I should have thought we looked pretty good, average or just above. Only a few countries have materially higher green taxes. Also, I had the impression that most of Europe has dramatically higher fuel taxes.

Curios about NZ , do they generate a lot of fossil carbon in the first plac?

Apologies all, I should have included the url of the initial post, which has links to the study from which the diagram comes from if you want to follow it up. (I haven’t).

I remember petrol being fantastically expensive in Turkey due to taxes – the linked article mentions this is part of the reason for the USA’s low ranking and it’s the biggest tax on pollution I can think of.

I find it very hard to believe that Green taxes in Australia are higher than in Germany and some other large EU countries. I presume that they are not taking into account the EU ETS, which isn’t explicitly a tax but implicitly is?

Incurious and Unread (aka Dave)

They are probably also ignoring the feed-in tariffs paid for solar PV. Just shows how this is a difficult thing to measure.