I knew Rob Chalmers who worked in the press gallery for over 60 years and has just died after what they call in the media “a battle with cancer”. Cancer won as it so often does.  Peter Martin does the honours here including reproducing a fine letter to Rob from PM Julia Gillard, which, on account of its ease, I reproduce from his site over the fold. It ‘s one of the finest uses of high office to send letters like that – read some of Abraham Lincoln’s letters to widows and mothers of soldiers who died on the battlefields of the civil war.

In any event, it led me to think, there was something different about Rob – though it wasn’t nearly as different when I knew him around 1983-4 when I worked for John Button and 1991-3 when I worked for John Dawkins than it is different to today.  Journalism was more of a craft in those days. There was still a strong distinction between news and commentary, and between the story and the teller of the story.

Journalists were not celebrities and weren’t as full of themselves to the same degree – Richard Carleton excepted. Certainly in 1983-4 and less so in the 1990s, the ABC was a utility, not a ‘brand’. Things were different in the media then – and mostly better.

Anyway, Rob was a nice guy, happy to talk with all comers – not one of those types whose eyes dart around the room looking for someone more important than you. May he rest in peace (though on thinking about it, I’m not too sure what that means.) 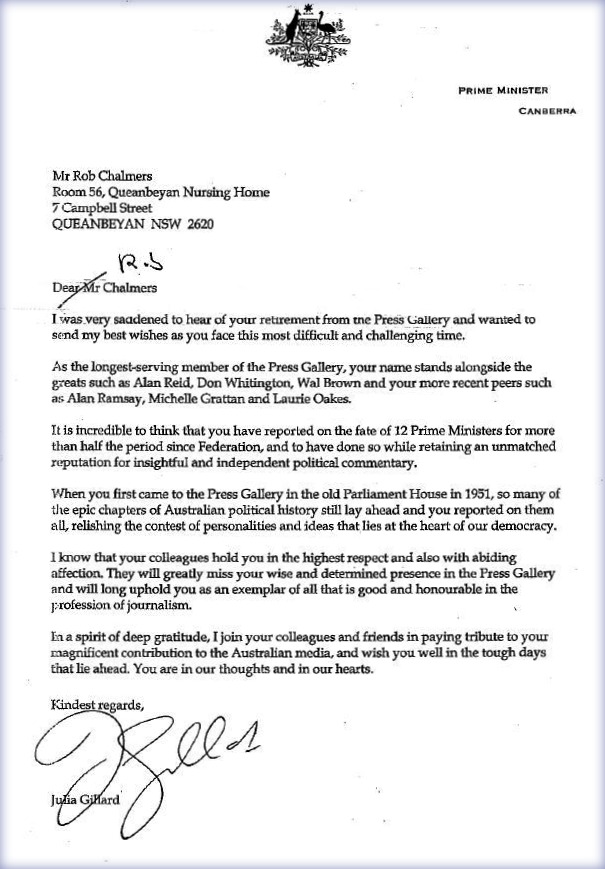 I agree Nicholas he was a legend around Parliament.

Always helpful to giving advice on how to utilise Parliament, approach both parliamentarians and bureaucrats. He was highly enjoyable and entertaining over a meal.

He will be missed

Sixty years in the Gallery Alan Ramsey @ Inside Story

I knew Rob reasonably well in the mid eighties when I carrying out some lobbying activities for (parts of) the mining industry. His newsletter ‘Inside Canberra’ was a must read and he was always unstinting in giving useful advice as mentioned by KBK. Good journo,good company – not a widespread conjunction.