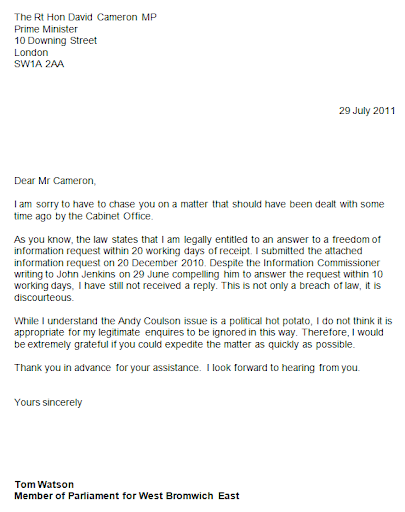 One of the heroes of ferreting out the routine criminality at the News of the World is the former Grandiosely titled Minister for Transformational Government, Tom Watson who’s been on this case longer than just about anyone and a genuine champion of open government with whom I had some dealings doing my Govt 2.0 work. Here’s his latest effort.

This entry was posted in Economics and public policy, IT and Internet, Media. Bookmark the permalink.
Subscribe
Login
2 Comments
Oldest
Newest Most Voted
Inline Feedbacks
View all comments

Reinforces the message, even with folk as mulish as Cameron and the Murdochs. These are people who cant- wont- be told; ignorant in their arrogance and vice versa.

Without telling too many ales out of school, I have been struck dumb recently by pollies and public servants who know what an Act says, and proceed to readily ignore it, based on the flimsiest, weakest, most cover-your-arse legal figleaf they could find.

20 days for an FOI request is pretty rough though. We have 45 days, and often need it all.