Posted on November 6, 2011 by Nicholas Gruen 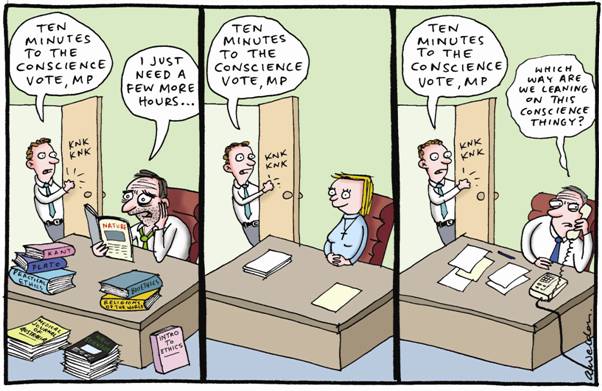 On the suggestion, some time ago, of Ian Marsh, I finally caught up with the New Democracy Foundation a few weeks ago. Not surprisingly we got on well.  I’ve always been keen on things like consensus conferences – which bring the deliberation of a jury to wider social and political issues.  And when we were debating the republic and the evils of Pauline Hanson I proposed as an antidote to the latter, a third house of parliament chosen by lot. I liked the proposal that Gillard put up to a the the last election for climate change to go to such a body, but it was done in such a way and in such circumstances that it got buried under the media’s and the electorate’s (justified) cynicism about it.

Anyway, I’ve recently been thinking about how such institutions could improve our politics. If the ALP had the courage of its convictions, if, as a relatively conscientious government it comprehended the ease with which the Opposition has been able to divide and conquer the electorate with one scare campaign after another, it would realise that developing such institutions would be in its own long term interest.

In any event, pondering these things an idea occured to me. Sometimes people lament what the party system has done to us – with elected representatives not being able to vote issues on their merits.  In fact this is as it should be – or arguably so. They’re supposed to be representatives after all, so they’re supposed to be publicly accountable for the way they vote, and, given how much community consent is channelled through political parties, they need to be publicly accountable to the party they represent.

Still, wouldn’t it be interesting to know how they would vote if they had a secret ballot? Of course that would be inconsistent with representative democracy.  We need to know how they are voting or all sorts of strange things could occur – like parties placing ‘moles’ inside their opponents’ parties. In fact the members of parliament do have a secret ballet (or if they dont’ now, they did once) in electing the titular heads of the chambers, the Speaker of the House and President of the Senate. And at some stage a public vote would have put in a Liberal as President of the Senate, but in fact the votes when counted supported the Labor candidate. I think it was Justin O’Byrne but the date (1974) seems wrong. Perhaps someone can enlighten us. In any event the ALP candidate was a better candidate than his opponent and one Liberal crossed the floor – or perhaps I should say snuck across the floor – in the secret ballot that was held.

So the thought experiment is this. We can keep going with the current system, but we could also require Parliamentarians to post secret ballots as well – which could be expedited very easily over the net. It would place a bit more pressure on the parties to avoid acting too cynically as they would be shown as supporting policies that do not have the support of the majority of Parliamentarians when some choose to vote according to their consciences.  Of course I’m not really suggesting it could ever happen.  But it might be good if it did. It would also be more fun!

a nice idea but I fear one easy to subvert in practice. In the ACT, for example, ALP preselections are meant to be conducted by secret ballot but I understand from media reports that the factional machines insist that their faction’s voters participate in a “show and tell” where they show their ballot paper to an overseer before it is lodged. It would not be beyond the bounds of probability for a similar system to be applied by factions in whatever party to their members in relation to voting via the net (it would be easy to write a simple program that monitored each vote as it was cast, and alerted the overlords to any deviation). It would be possible I suppose make it illegal to view a parliamentarian’s vote, but that would be resisted as running counter to freedom of association.

Incidentally, you have included a superb evocative typo when you suggest that in electing the Speaker and President ‘members of parliament have a secret ballet’. Raises the image of all the MPs and Senators twirling around their chambers in secret, with no prying media, dancing on until there is an election result.

I was always struck by the dunny just out the back of the Speakers’ chair in the old Parliament House. In gold lettering on the frosted glass door were the words “Male members only”.

More difficult than it looks unfortunately. The trouble is that you either hide the computational machinery and trust the answer (which opens you up to treachery embedded in the code) or you allow someone to openly audit the computational process in which case you are just trusting that person and the votes aren’t really secret anymore. Lots of schemes exist to allow random partial audits, making it likely that a cheater will get caught, but these schemes do tend to be overly complex.

However, the difficulties with electronic ballots are unrelated to the number of votes cast, and bandwidth required to actually cast one vote is next to nothing (a single SMS should suffice). Thus, if you are going to have electronic ballots at all, it makes sense to open up the vote to all citizens and have a straw poll on every major parliamentary decision. These polls will not have legal weight, but they provide an opportunity to test and debug electronic polling software, while getting the public used to the idea that they might want to start paying attention to how they are governed. The poll results could be published in Hansard alongside the minutes of the debate, and if governments were consistently coming up with unpopular decisions then I’m sure they opposition of the day would take advantage of that.

Except in Greece of course, where a government can threaten to take an unpopular decision to the polls, only to have the opposition rapidly get onside with the government in order to prevent the citizens from having any say in the matter. The funny things that can happen when billion dollars of debts are sloshing around… go figure.

I understand from media reports that the factional machines insist that their faction’s voters participate in a “show and tell” where they show their ballot paper to an overseer before it is lodged.

Well, if they were ordinary paper ballots, and if the election was overseen in the normal manner, such behaviour would be blatently illegal (as well as clearly being immoral and unethical). It is also easy to prevent, should the party care to do so.

In Switzerland after the four-yearly general election the two houses sit together (246 MPs) and by secret ballot elect the Swiss cabinet of seven ministers. They mostly re-elect the incumbents. For the last 60 years or so they have elected two ministers from each of the three largest parties and one from the other major party.

Switzerland also has a third chamber – the people. All laws passed by the first two chambers are liable to referendum and decade by decade 6% of them do so. Every foreign treaty must go to referendum.

I am somewhat bemused that this Opposition is unprecedently so adept at running scare campaigns against an incumbent Govt. Could that simply be because the Govt worries the daylights out of the majority of us now and it doesn’t take much to jangle the sensitised nerve ends?

As for how institutions could improve our politics, we simply need to reverse the method of voting in both Houses and most of our problems would be solved.