The theory of deceptive sentiments

Posted on November 9, 2011 by Nicholas Gruen 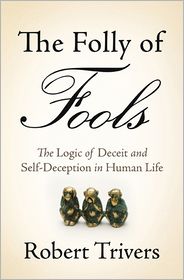 The latest psychology bestseller The Folly of Fools is on the triumph of deceit. It looks quite interesting. Anyway, it looked a bit too focused on the bestseller formula – which is often the book of the article formula for me to want to read it all. But I’ve downloaded my Kindle sample and will see how it goes. In the interim I hunted down a few reviews. And an interview at Salon here. The author had a blinding flash of insight.

Working on parent-offspring conflict, I suddenly had this flash of insight: “Ah! If self-deception improves your ability to deceive others, then you would have a strong selective force to get it into your consciousness.”

Well, on inspection it may not have been blinding, but we have it on the author’s authority that it was an insight.

In any event it struck me that it was an inversion of Smith’s Theory of Moral Sentiments. In that book, as the child grows conscience begins as an H.L. Mencken conscience. H.L. Mencken said that conscience is that little voice inside us that tells us that someone might be watching. But over time the child internalises the idea and comes to acquire an impartial spectator, a ‘man within the breast’ whose approbation he craves. I had my own insight which is that the new bestselling insight is the inverse of Smith’s insight about how good can come from internalising things. Smiths’ insight is an insight into humans as rhetorical creatures (Smith’s first academic job was as a teacher of rhetoric and belles lettres). Alas this insight is less visible to us now than it was to him.

Then rhetoric was the study of communication and persuasion. Today it is rhetoric as in ‘mere’ rhetoric.

The rift which occured between the view of rhetoric as a central aspect of intellectual endeavour and our own conception of rhetoric as essentially cosmetic is captured comically in this passage by Howell.

The chasm which yawned between the elocutionists, on the one hand , and the traditional or new rhetoricians of the eighteenth century [Smith was one of the finest of the new rhetoricians.], was very wide. . . . Its width at its greatest extent . . . can be suggested by a comparison of the intellectual level of the first sentence of Aristotle’s Rhetoric with that of the first sentence of an American elocutionary textbook of the late nineteenth century. Both of these works were intended for mature students. Said Aristotle: “Rhetoric is the counterpart of dialectic.” Said the elocutionary textbook: “Always inhale through the nostrils.”

I imagine if you’re really interested, then it would be quicker to simply read the paper from which I presume most of the arguments come from, as well as comments from other rather knowledgable people (I haven’t read the book). I must say that, speaking of deception, I also think that the probability that the author thought of this in a flash of insight as rather unlikely.

Your comment about Adam Smith is interesting — any mention of where he got this idea from somewhere? This idea idea that we start off good and try not to end up bad or start off bad and try to end up good sounds rather like trying to describe differences between some religions to me, so perhaps it’s one of those questions that really sits in the human psyche that people worry about from time to time.

I wish I knew more about where Smith got his ideas.

Hume and Francis Hutcheson and the stoics as far as I know, but I think TMS was regarded as pretty original. (the wealth of nations quite a bit less so. Quite a lot of the basic ideas about the division of labour and the ‘invisible hand’ – though not that language – were floating around before he synthesised them.)

Very funny from Howell, but I guess a cheap shot.

“Then rhetoric was the study of communication and persuasion. Today it is rhetoric as in ‘mere’ rhetoric.”

I suppose it is marketing now. I wonder if we are so prone to talk past each other because we no longer understand that part of being persuasive is the ability to be persuaded.

If you believe that someone is deceitful then you probe them for inconsistency. That’s because maintaining a fully self consistent worldview requires computational effort.

The person being deceitful needs to maintain TWO worldviews — the real world (for their own purposes) and the false world (to hold up under scrutiny). Thus, they have double the computational workload, and are more likely to make mistakes.

From this point the deceitful person could choose to lower their workload by throwing away the false model, but then they would be stuck with telling the truth, or they could throw away the real world model and just keep the false model. This results in the interesting situation that it becomes very difficult to catch them out in an inconsistency because they have full computational resources online, which is approximately equal to the effort you can put into probing them.

On the other hand, once you detect that a deceitful person has thrown away their model of the real world, all you need to do is send them off to do a task that requires real world understanding, and the physical universe tends to finish the job for you. Tough, but fair.

Tel, there is a third possibility, which is that the apparently deceitful person has adopted, for one reason or another, a world view which differs from your own but is still consistent with the world as perceived by him/her.

Aspects of this are explored by, for example, Carol Tavris and Elliott Aronson in “Mistakes were made (But not by me), subtitled “Why we justify foolish beliefs, bad decisions and hurtful acts.” Harcourt, 2007. In a nutshell, cognitive dissonance, perceptual errors, the foibles of memory, self-justification, pride and the very human reluctance to let go and own up are all at work, permanently, in each of us.

Thus, your assertion that there is a “real world view” fails. My real world view is almost certainly not congruent with yours or anybody else’s. I am thus not in a position to accuse anybody of harbouring a “false world view” without entering some very murky waters.

If this is so, then the business of persuasion becomes an effort to align world views, rather than accusations of fact and fallacy.

I’m no expert in this area – civil engineers are notorious for being impervious to others’ opinions/views (self-opinionated bullies?). I have come to realise that am not atypical in this regard.