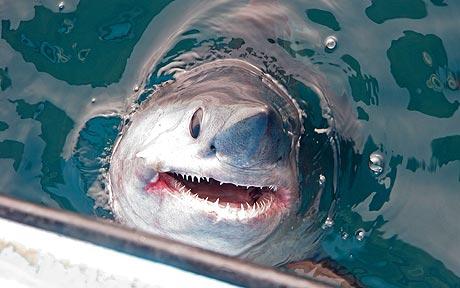 On a Background Briefing program on micro-targeting of political campaigning and advertising, I was being pressed by the interviewer. If people hate negative ads, if they degrade the reputation of politicians, why do they do it?  I likened it to over-fishing where each fisher pursues their ‘local optimum’ and keeps fishing, but the result is that collectively, everyone is worse off – the global optimum is forsaken.  Trouble is, I can’t imagine too many disarmament agreements between political parties – so they can get on with their positive campaigning!

Anyway, this prompted Bob McDonald to write to me telling me that there was a lot of nonsense talked about overfishing. Anyway, after a series of emails, I invited him to send me a guest post. I publish it here without endorsing it or otherwise. I am completely unqualified to judge. Now this doesn’t mean I’m giving away my right to have an opinion, but I’ve not really even had time to consider Bob’s arguments or poke around to see how they stack up, so I’m just ‘putting them out there’ – as my daughter says these days. But in my ignorance and haste, I must admit his argument seems interesting and plausible.

It is a common and shared observation that there are less fish along the coast, especially in bays, inlets and estuaries. As a naturalist less fish actually means less time when fish are abundant in a particular place – and ‘biting’ from the point of view of someone trying to catch them with bait. For watching or catching fish – or for events of seabirds feeding on them – it is the presence of schools of smaller fish in vast numbers that indicate good fishing and a productive ecosystem for that time. There are many species of small fish that fit this bill, from anchovies to sprat, pilchards and even herring and these fish, rarely fished in Australia, are the feed of many others that are.

The habitat types, whether sand or mud, seagrass beds, mangroves, saltmarsh and even the vegetation that fringes estuaries, are the pastures of fish. Places where they can attach their eggs and shelter from currents.  Estuaries, where the freshwater flow meets the tide are among the most productive of these ‘pastures’. The smaller fish feed and in the zooplankton layer, on algae, fish and mollusc eggs etc. that is near the surface and mostly invisible.

The nursery grounds for many species are also the feeding grounds for others. Young fish need the shelter of these habitat types and even simply shallow water on tidal flats to avoid their predators. Even where mangroves and sheltering vegetation have been lost many fish and prawns still use ‘the night’ to hide from birds – with restoration of such shelter having obvious benefits to fish production.

Along the coastline and in estuaries fish feed and mate and lay eggs or have ‘live young’ in the case of many sharks, especially small coastal schooling species.  If the water quality is bad, the streamflow too weak for the tides to push it up into ‘shelter’ or this habitat is missing, the times of fish abundance are less frequent.  The species we fish for are few but the species reliant on the same habitat, especially the invertebrates, are typically of many hundred of ‘kinds’ and many millions in numbers in ‘productive habitat’.

Imported overseas styles of catch management totally ignore these coastal habitats where most Australian fish breed. By managing catch alone under quota and catch share systems there will be invariably less fish in an ever growing market. If only the landed price of fish is considered this may well appear to increase the net value of fish to the economy – but this is a grim and narrow view of fisheries economics.  Under this limited and flawed vision of ‘supply and demand’ into the future the last boat will land the last fish that will be worth the entire value of the previous fishery!  The hundreds or even thousands of people could made needlessly unemployed, in this scenario, are reduced to ‘ignored and uncalculated statistics’.

Stock management (or catch) management without ‘pasture’ management would no more work for farming than it does for fisheries.

There is an opportunity to revisit Australian fisheries economics that has been reliant on the imported belief that only the amount of fish caught in the past by commercial fishing (and less so by recreational fishing) determines the amount fish available to catch at any time. Australian fisheries, fish markets, fish processing, wholesaling and retailing have a rich and recorded history loaded with excellent but as yet mostly unstudied data.

A few scientists, like Menakhem Ben Yami, have questioned the assumption that commercial fisheries alone set the stock of fish. In recent articles in World Fishing Magazine he pointed out that according to the UN data base both marine mammals and seabirds each consume as many fish as are caught commercial fishing.  This analysis traced the assumption that only commercial fishing sets stocks of fish back to Germany early last century.  Even this pivotal critical analysis does not include fish eaten by other fish – the carnivores that are mostly fished for.

With Australia being the last ‘settled’ continent, the flattest and driest and without reliable streamflow from snow melt it is not outrageous to suggest its fisheries are unique.  With widely dispersed capitals each with its own regional parochial taste for different species of fish it is likely that the economics of Australian Fisheries are unique too.

Nicholas – I think there are slabs of text missing from this post.

It was written as a 2,500 word post and I asked the author for something less Wagnerian. I think it’s now intended as a 3 part series of posts.

hmmm, photo of friendly pointed-nose seal for intro was appreciated.

There is an opportunity to revisit Australian fisheries economics that has been reliant on the imported belief that only the amount of fish caught in the past by commercial fishing (and less so by recreational fishing) determines the amount fish available to catch at any time.

If this is what is being done of course it will be unreliable as populations will fluctuate due to natural factors such as disease, weather and competition of other species. The biggest problem I imagine is to determine at any point in time what the population of a given species is likely to be.