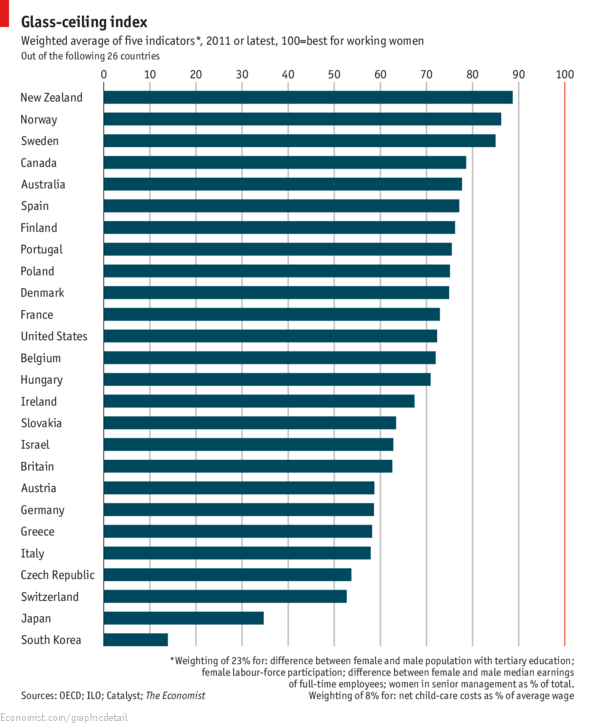 Click on the image for the website from which it comes. Detail on the makeup of the index in the legend at bottom of the graphic. While unusually low female labour force participation sounds like bad news, I’m not sure that the higher the female labour-force participation the better. It’s presumably an empirical question what the optimal proportion of women looking after their kids is and that would have a lot to do with how many women wanted to be looking after their kids – or doing yoga or weights for that matter. (Just like the optimal proportion of men in the workforce would be a function of their preferences).

It seems like a pretty sloppy effort at putting together an index.

More to the point, the higher the female labour-force participation, the bigger the gender wage gap. Its simple really – the women who are not participating tend differentially to be those who, for whatever reason (lack of skills or experience, a feminised and hence low paid occupation, or just simple discrimination), could only command lowish wages. That is, staying home has a relatively low opportunity cost.

So getting more of them into work will, all else equal, lower the average of wages paid to women – that is, increase the gender wage gap. Depending on what we’re trying to achieve this may be a price well worth paying – but it is a price.

It gets Asia correct. South Korea is well known to be horrifically sexist, and that’s not just at work.

I’m with Desi; these types of indices are easily gamed and this one is especially poor as it contains way too few items and many things that are very important, such as statutory paid maternal leave entitlements; access to divorce; access to abortion; and the equity of post-divorce property settlements are left out. I suspect a minor change in what is included could significantly affect the results.

Anyway, here’s my own dodgy indice, which undoubtedly would produce a vastly different result:

According to my GIGO indice, men are being crushed under the weight of the matriarchy. Nonetheless, I’m sure it would look convincing in a well presented graph.