Posted on September 6, 2014 by Nicholas Gruen 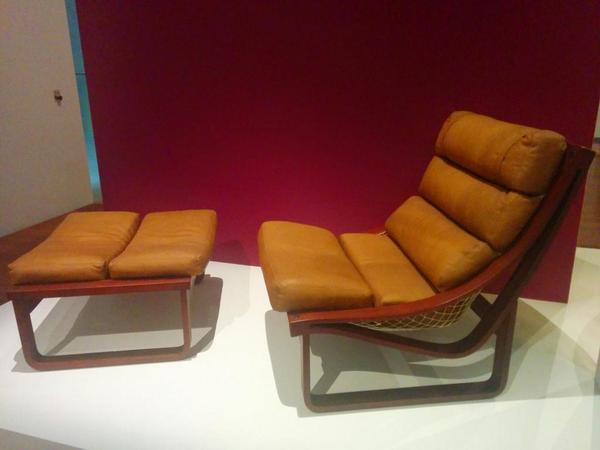 I recently visited the National Gallery of Victoria’s exhibition of 1950s furniture. I went to see Fred Lowen’s furniture. Fred was a Dunera Boy – who I became aware of towards the end of his life when he had an exhibition of drawings at Australia Galleries in Collingwood. There was also an illustrated autobiography there which I bought and read.

Lowen became aware of Scandinavian design and visited there and brought back a great enthusiasm for the clean minimalist use of natural materials which he then skillfully worked into commercially very saleable furniture. FLER was the brand started by fred and another Dunera Boy Ernst Rodeck – the brand was a spelling of their respective initials. The picture above is one of Lowen’s

It was quite an emotional experience for me. I doubted it would be just looking at Fred Lowen’s furniture and in fact there wasn’t a lot of it – other modernist designers seem to have been more prominent. Grant Featherstone seems to have been the star and he produced some very fine furniture.

But the thing the whole feel of the display rooms they’d set up was so like the rooms I was a young child in. And then every now and again a FLER chair that was exactly the same design as one I’d taken as just part of the furniture – as it were. My parents were middle class and not much in the way of trendsetters so, while there would have been plenty of homes that didn’t look ‘Mid-century Modern’ to take the name of the exhibition, there were plenty that were. And I was back in that world.

The design above was the most sumptuous and I think the most successful of Fred’s designs, though we never had it in our house. It was modern but not ‘mid-century’. This was a much plusher design from the latish sixties. Oh and if you look carefully you can see some meshing beneath the chair housing the cushions. As part of the design it jumps out at you. It doesn’t jar with the design but somehow it does seem to be calling attention to itself. Lowen was thinking of the hammocks in which they all lay, in the stinking, clammy hold of the Dunera with shit washing around the floor when the latrine bucket rolled over. That was if they were lucky and managed to get a hammock. If they weren’t they slept on the floor.

Truly simple and minimalistic design. But I was thinking if somebody like me (200lb+) sit there, what would happens to that mesh-back?

You’d be fine – trust me – the mesh is an affectation. Your weight is supported by the wooden frame. It’s look is designed to have echoes of a hammock, but not to feel like one when you sit in it.

Nicholas
The amazing thing is that only 12 or so years ago ANU, which has a lot of Fred Ward and similar designers furniture, came close to throwing them all ot. As it is we and others back them were able in those days, to get this sort of stylish, well made and timeless stuff, for a fraction of the cost of ‘Alen key’ MDF crap!

Tessa is still going strong and their classic styles are resistant to fads.