Governments around the world have in recent years destroyed their seized stockpiles of illegal ivory, egged on by the World Wildlife Federation which believes it sends a signal to gangs that kill Elephants and Rhinos for their tusks. In January, Sri Lanka reportedly crushed 350 tusks, and in 2015 several tonnes were crushed in the US and China alone. 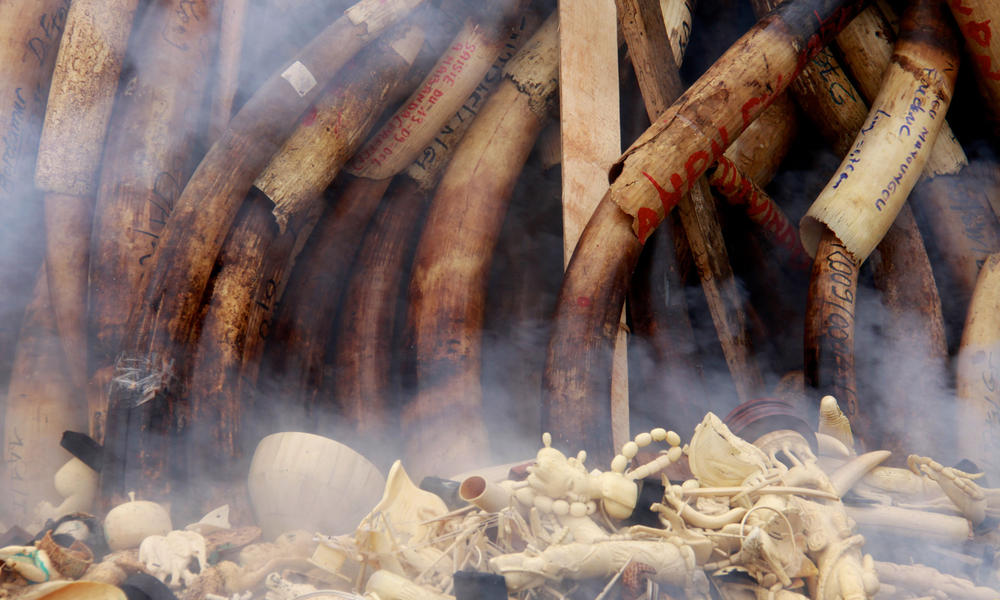 Now, don’t get me wrong, of course I condemn the killing of elephants and rhinos for their tusks and wish the end of the hunting gangs that kill these magnificent animals. But, but, but ….. crushing the seized ivory really does seem to me a bad idea because it drives up the price of illegal ivory and hence makes it more lucrative to kill more animals. Rather, the seized ivory should be sold to the end users by an independent international organisation, with the proceeds spent on something that helps elephants and rhinos, like a large nature reserve or a breeding program.

Think about it: selling the ivory to the end-users on the black market will reduce the prices and hence the incentives for gangs to kill more elephants and rhinos. So selling it to drive down the price and using the proceeds to help the animals has a double-benefit. All it needs is a two-track approach of selling to the same black-market users that other enforcement agencies will be trying to close down, ie we should sell to the users that the police can’t find. And in order to be able to do that, the entity selling it should be completely separate from the police.

Have things like this been done before? Certainly. A good example is a gun amnesty, whereby we pay for the illegal guns still owned by the general public, no questions asked: they have gotten away with it and rather than lose ourselves in moralizing, we pragmatically pay them for their guns so as to minimize the impact of their illegal activity on our society. Amnesties for previously undeclared taxes follow the same principle.

The current practice violates basic economics: by crushing the seized ivory, the authorities are driving up the price and condemning more elephants and rhinos to a horrible death. The moral crusaders of the World Wildlife Federation of course don’t mean to do this, but I do think their actions will have that unintended effect. A bit more pragmatism would help their cause.

Won’t selling it back to the black market stimulate that market? No it will not, because the proceeds are not helping the gangs that kill elephants. Rather, they satisfy the wish of those who buy the ivory from those gangs, and by doing so with the seized ivory, we would undercut the gangs. Of course we also want to punish the users, but that is separate from the question of the price of ivory paid by the users whom we cannot track down. By having one organisation selling to these ‘users we couldn’t find’ whilst having the law enforcement agencies going after both the gangs that supply new ivory and the end-users, we minimize the harm and the size of the market at the same time.

Would the same argument hold for things we don’t want to see to used, like hard-drugs? No, because in the case of hard-drugs what is objected to is not the actual production, but rather the consumption of drugs. So feeding that consumption by selling seized drugs would lead to the very behaviour we were trying to stop.

But this is not true for the ivory trade: we care about the elephants and the rhinos killed for their ivory, not about the ivory usage on its own. To see this, imagine that we could make artificial ivory that would be identical to the real thing. Well, then of course we indeed should produce lots of it and saturate the market so as to make killing elephants and rhinos uneconomical. So because we don’t really care about the use of ivory, but rather the ways in which gangs procure it, we should have no qualms about selling the illegal stocks.

Of course, we should at the same time try to close down the illegal ivory trade and use, ie we should encourage China to close down its ivory markets and declare the use of ivory a taboo (which it is now doing!) and we should certainly also egg on the police forces to go after any ivory users they can find. This is why we need the selling of the seized ivory be done by a separate organization that is not into law enforcement.

We should hence be pragmatic about the fact that our police cannot yet find all the ivory users and sell them our stockpiles of seized ivory.

“… In the case of hard-drugs what is objected to is not the actual production, but rather the consumption of drugs. So feeding that consumption by selling seized drugs would lead to the very behaviour we were trying to stop. But this is not true for the ivory trade …”

Paul, really nice point here. My guess is that most people would think of the drugs case and the ivory case as analogues; you’re saying they’re opposites. Or to put it another way:

I think the basic argument against this is that is that collecting ivory falls into the category of human behaviors that trump this economic rule that marketing people probably like. Basically, if you get rid of enough ivory, people will simply forget about it as a luxury commodity and substitute it for other things (e.g., gold). Similarly, part of the way fashion trends work is by making people believe that if you have something I must have it too. For example, there are especially tasteless nouveau riche groups in China, and it wouldn’t be beyond me to think that there is a fashion one upsmanship amongst them, where if you happen to have some ivory accessory, I will get a bigger one. In this case, if someone stops you getting it, I’ll never think about buying it because it wasn’t something I wanted nor thought about in the first place. I can think of many things like this including ones similar to this. For example, if I never saw opals, I probably wouldn’t ever think of buying one.

Whether this is actually true and outweighs the simple cost argument you present is empirical and I would be curious to know if there is any real evidence either way. Maybe there is something to be learned from marketing after all

The counter to this is that it is very hard to track source after the ivory is sold, so having many tonnes of LEGAL ivory floating around the secondary market will make it much easier for ILLEGAL ivory to float around with it. By reducing the risk in trading ivory it may reduce prices of illegal ivory but expand the market for it.

But which effect matters more – ie whether legal ivory and illegal ivory are substitutes or complements – is a question on which I don’t know the answer and you may not either. But you are right that it is an empiric matter rather than a moral one.

Both you and Conrad dont get the dual-track basis of my proposal: all forms of ivory usage would still be illegal. What one is doing is selling to people whilst simultaneously saying that you support the illegality.

The dual-track nature is just like in a temporary gun amnesty: you look away for a moment when someone turns up to bring a gun to you and you pay them an amount, not recording their name or details. But its clear that if the police finds them tomorrow with a gun, they will be punished. So too my ivory-onsell proposal: you dont record who turns up to buy the ivory today, but you support punishing anyone you otherwise find possessing and using it tomorrow. And the way to organise this is to have a separate institution doing the buying from the punishing.

Paul, it seems that Dr Duan Biggs agrees with your intuition about the impacts of burning recovered ivory, however some recent research from the National Bureau of Economic Research suggests the opposite – that the legal sale of recovered ivory in 2008 may have precipitated the massive increase in poaching over the last few years. Thought you’d be interested.

By the way, fantastic news about the outcome of your court case.

thanks for the well-wishes, yes a great outcome.

The article you link to seems extremely relevant to the argument in the post. I am at home and hence can’t download the nber papers and see what data they have.

One caveat about the interpretation of their paper comes from the odd wording in the abstract “We find that international announcement of the legal ivory sale corresponds with an abrupt ~66% increase in illegal ivory production across two continents, and a possible ten-fold increase in its trend. An estimated ~71% increase in ivory smuggling out of Africa corroborates this finding, while corresponding patterns are absent from natural mortality and alternative explanatory variables.”

Why should the announcement have such a huge effect? Difficult to explain. Something pretty odd must be going on, such as poachers reacting to expectations of price drops.
Still, very relevant. If true, it makes my suggestion much less persuasive.

I have now looked at the paper. They put in a lot of work, but I have to say it’s just not a convincing story.

Some particulars:
– They find a 15% increase in illegal carcasses relative to trend in 2008.
– In the middle of 2008 it was announced that China and Japan could buy ivory from 4 Southern African countries. The amount of ivory sold (from animals that had died of natural causes) was substantial (roughly equal to all the destroyed stockpiles since 1989), so it mattered in terms of size.
– The actual ivory was bought at low prices at the end of 2008, but only arrived in China and Japan mid-2009.
– China and Japan put up such high prices for ivory that they haven’t sold their stockpiles even today.

The puzzle is why the number of illegal carcasses should rise in 2008 when the legal ivory didn’t hit the market till 2009-2010 (and even then only slowly). The authors themselves have a quite standard demand-supply model in mind in which there is no such thing as an announcement effect (which is what they find). It’s a failing of their paper that they have a model that doesn’t fit their story. Even if you go beyond their model though and do consider anticipation, one is hard-pressed to come up with something plausible: the idea that would-be poachers entered the market because they knew what Chinese consumers were going to want 2 years later in reaction to the release of legal ivory is far-fetched (markets are not that rational!).

Interesting. Thanks Paul. I agree that the effect of the GFC seems like a more plausible explanation for the apparent uptick in poaching than the announcement of the legalised sale of ivory.