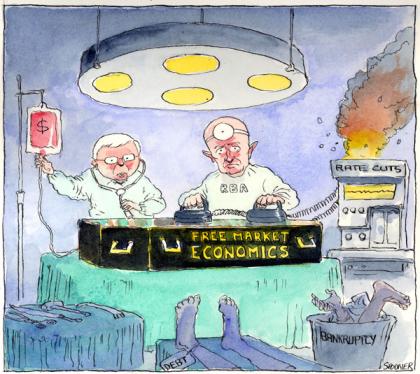 Apropos of my general theory of bullshit – outlined here – here are a few more straws in the wind. Consistent with the theory, the the signal to ideological noise ratio in political speeches has been falling precipitously lately – at least in the US. This has been interpreted as ‘polarisation’. Certainly in US politics, on account of one of the mainstream parties having taken complete leave of their senses, there is more polarisation. But people are everywhere pretty despairing of their mainstream politics, even when it’s not been becoming more partisan (in many ways Australian political debate has been less partisan lately with two neoliberal parties battling it out for the consent of the governed.

Then there’s this bizarre and intriguing story about a court deciding whether or not an artist’s word that he didn’t paint a painting is to be believed. Further:

Deborah R Gerhardt, a law professor at the University of North Carolina school of law, said the case points to how closely the value of a work is connected to the artist’s name.

“This case represents what I think is a very interesting trend in the art wold: so much of the value of art turns on the brand name of the artist and artists really like to control the quality that their names are associated with,” she said.

I’d be very interested to know if this claim – that more and more of the economic value of painting is tied up in the ‘brand’ of the artist’s name. It rings true to me. In many arts the craft of creating the art is such a strong precondition of good art that if some great work that there’s plenty left if you discover the author was someone other than whom you thought.

Likewise to fake a great artist from pre-modern times, one would have to have sufficient skill to paint something that was nevertheless a considerable achievement. Today arts like music performance and ballet remain in this category. To use an old slogan of Edison’s, they’re 99% perspiration and 1% inspiration. Today a lot of visual art is ‘conceptual’. And a lot of the reception conceptual art is in the packaging. When I was cartooning I remember thinking that I could have done up my cartoons as large canvasses and sold them as conceptual art. Likewise, often when I see conceptual art in an art gallery, I think that its essential content could be conveyed just as easily in an op ed illustration – for instance by Spooner. But then that makes less money – and less splash.

All in all, we’re in love with the big stuff, whether or not that makes sense.

Big name artists (Hirst, Koons, Barney, Abramovic, perhaps now Kapoor) these days have more in common with curators than with ‘artist’: they curate their own careers as brand experiences.

Actually physically making the art is often handed over to artisans and art factories, while this makes sense in team effort art (sculpture through to archtecture), it makes the brand name artists mere designers (particularly the conceptual artists) meaning they have to protect their brand through curation very strongly. (Sure those old painters ran schools, studios and workshops, and worked their brand, but they were on the floor, dabbing the oils, directing the staff, teaching.) Art labourers today may never meet the artist they make the art whose name goes on it, the artist may never physically touch the art made in their name.

This outcome, particularly with the names mentioned above, is partly the result of a niche in the market created in the c70s by museums and festivals (goers) for ‘blockbuster’ shows’ of ‘big names’ like da Vinci, Rembrandt, Tutankhamun or more latterly Monet, Magritte and Picasso. These ‘brands’ are primarily curated creations by interested types (dealers & academics) servicing descendents of those who went on grand tours.

Recent big name artists (defined as recogniseable by people who are not their friends in a mass QI watching sector of the community) have responded to a marketing niche for this style of blockbuster show ‘only new or modern’.

Actually making the art in these shows (done in house by museum/gallery/festival staff and contractors) is less important than representing the brand, indeed important art ‘design’ work is often left to these workers. As indeed is sometimes I am afraid even the concept. The brand alienates the labour here folks, even if it is intellectual effort.

This brand recognition process is at play similarly where there is Uber, FB, google… where the recognition and the experience become over-familiar but softly dominating as a response to the economies’ increasing diversity otherwise. We can only choose so much, so we end-up all choosing the same. ‘Art’ becomes a byword for Koons. Photocopying is the old word for xeroxing.

It’s why the French could only choose Louis as a name for their Kings.

So don’t hate the hipsters too much, they may be faking it, but they are only small time crims.

Thanks very much Meika,

But I didn’t understand your last comment about ‘hipsters’. Can you clarify please?

Yes I didn’t understand that either

I guess that the hipsters are playing to the “brand is all” trend by cultivating their personal brand the same way they cultivate their stupid beards and irritating cultural appropriations. What matters is not whether they’re original, or know what they’re doing, it only matters that they have a distinctive look (the same distinctive look as all their hipster friends, with those subtle micro-variations that mark them as unique).

Working in a friend’s bike shop we saw this a lot when fixed gear bikes were a hipster thing. People wanted a specific look to their new bike, but had no idea how to ride the bike, let alone ride it safely. And often had no idea how much what they wanted would cost, or should cost, and many of them were unable to afford it. Sad hipster is sad.

Mieka
The growth in the numbers and , sheer scale of the big public contemporary art institutions that has to a significant degree driven this.
Prior the sixties and seventies there were very few big public contempory art museums – museums were for dead art.

In the years since then the numbers of contempory art institutions mushroomed , and they need something exciting and big to display.

they need something exciting and big to display

And ideally an engineer to review the design, and someone vaguely competent to assemble it.

It scares me how many tonne-plus artworks I’ve seen where I can’t imagine how you could build it such that it would survive being rocked or dropped. Yes, obviously it’s there now, but what are the safety margins? If a wire breaks does it all fall down? I have too much experience of working in the art world to have any confidence that anyone involved knows diddly squat about the engineering they’re doing.

Brand is the new land for rent seeking.

Nicholas
Funny thing – what’s in a name.
There are two john walkers who paint pictures , one is English and about 80 and the other is john R walker (me). Because the English john walker moved here and lived in Melbourne for a few years in the early 80s, the two of us still (occasionally ) get mixed up.

For example while I have dealt with most of the mixups in auction records and the like, there are some aution sales records from twenty or more years ago , of untitled works on paper, with no photo of the work, where I honestly cannot say who’s work it is.

As for brand names and ‘factories’ it’s not all that new – quite a lot of the average Rubens was painted by assistants .
What is perhaps new is the influence of a relatively small circuit of international top rank institutions that all want impressive shows of the same sort of big name ‘contempory international’ blockbuster artworks; The center of that art world is a conference in biz class, 30,000 feet up at about the center of the Atlantic .

This is a topic I have been fascinated with for many years. On one level it seems pretty straightforward – art as a brand and a status symbol – but in other ways it is baffling. Does anyone know of anything more modern written in the vein and weight of Walter Benjamin’s influential essay “The Work of Art in the Age of Mechanical Reproduction”?

“It is only shallow people who do not judge by appearances. The mystery of the world is the visible, not the invisible.”