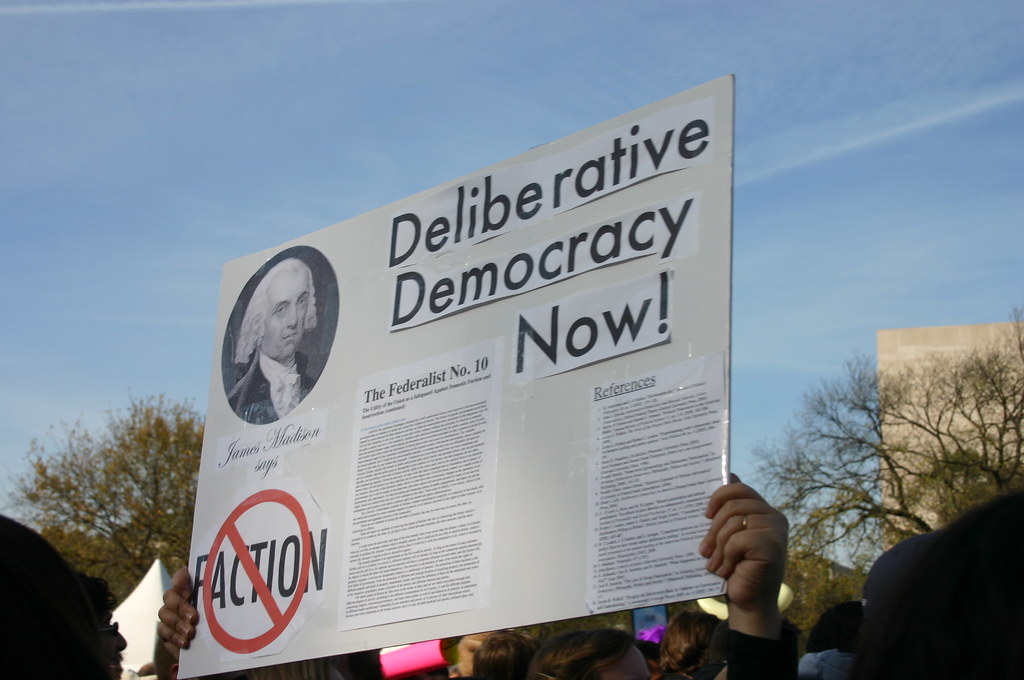 What do we want? Deliberative democracy! When do we want it? NOW!!

This story from this larger study speaks for itself, but is illustrative of some of the themes of my previous post on deliberative democracy.

In the spring of 2004 we began work on a citizens’ jury
process that we co-designed with the residents of a town in northern England. One third of its population is minority
ethno-cultural heritage communities. The subject of this ‘doit-yourself jury’ was to be decided by the twenty volunteers, drawn at random from community organisations and the electoral roll.

At the end of a day-long workshop, the jurors settled on
the role of the police relating to drink and illegal drug use
among young people. This topic made local politicians
nervous, they asked that we postpone the jury until after the
local elections in a few months’ time. They refused to provide
information to the process or cooperate with it.

Having heard a wide range of perspectives from a diverse
set of ‘witnesses’ the jury sought to recommend a number of
solutions to the problems highlighted during the process. The
jury at no point divided along ethnic lines. The following is an
extract from our 2004 report about the process:

We observed that white residents living in areas of diverse ethno-heritage often feel patronised by conventional anti-racism campaigns. Such messages are promoted by the
same authorities who seem to have failed to address some
of the most urgent problems facing their communities.

Our final report suggested that some Asian and other minority communities might welcome a re-direction of resources towards initiatives that allow them to join together with white community members and bring pressure for change, especially since many of the most pressing social and economic problems affect all the local population regardless of their background.

We suggest that the re-building of democratic engagement
in northern England, as in many other parts of the
UK, will be greatly enhanced by an increase of face-toface
meetings such as those that form the essence of a
do-it-yourself citizens’ jury. However, such exercises are
only likely to be successful when they involve a broad
range of local community groups and are not controlled
by any one stakeholder or funder.

Though the jury presented their report in person to the
council leader, a member of the European Parliament and
opposition politicians, the council studiously ignored the
process, both before and after the election. As organisers and
facilitators we and the jurors fundraised for ongoing activities
by ourselves, including a stall at the local market. But without
the backing of a strong campaigning organisation, our impact
on the way in which the local council consulted its
population was minimal.

The funder of the jury, a well known UK grant-making
foundation, was extremely sympathetic to the jury’s desire to
make their local council more accountable. They even
attended meetings at which council officials expressed interest
in working with the jurors. But four years later, jurors have
had no contact from the council and have become sceptical
that the council has any intention of working with them.

On reflection, we as organisers recognise at least two
mistakes we made that allowed the council to domesticate
the jury process, even though it was independent of them.
Firstly, we underestimated the power of the local council to
marginalise the process. By parachuting into a complex local
community and organising a process without it being jointly
owned and planned by accountable community organisations
that had legitimacy with the council, it was easy for
senior local policy makers to portray the jury as troublemakers.

Secondly, we wrongly expected that the multi-racial
group of individuals that emerged from the jury process
would be empowered enough to become activists in their
own right, supported by an infrastructure that could easily
be organised remotely from outside the region. In reality, the
community empowerment our project envisaged required
long-term investment in grassroots community work. Despite
modest ongoing support from an extremely patient funder
we have not yet found a formula that allows us to overcome
the suppression of our alternative to the ‘pork barrel’ politics
that dominates the dysfunctional government of an economically
deprived town.

There’s good and bad:
– the juries got shafted, which is a shame and was likely welfare-reducing
– the large grant foundation may now be ready to actually try and help people improve their lives as opposed to just “parachute in” and tell them what they need..

Oops. Would you mind deleting if possible that comment?