Travesties of the proverbial: Fukuyama and the id of history

Travesties of the proverbial is a very occasional series one post of which began with these words.

Keen readers of this blog will know that occasionally, just occasionally I identify a saying or concept which has somehow come to signify something close to the opposite of what its progenitor had intended

This essay documents quite a good example. Remember Fukuyama’s The End of History? If you’re my age, of course you do, and if you’re not, then I’m sure you can nod wisely and pretend. (Remember Rule 1 – Pretend is never good enough – except here at Club Troppo.) Well it was embraced as a triumphalist doctrine that things had got as good as they could get. As the essay points out:

The second half of Fukuyama’s title, The Last Man, was a direct reference to the thought of Friedrich Nietzsche, who argued that, although modern society with its emphasis on truth and transparency had ‘killed God’ (the future of Western politics was egalitarian and secular), it had nothing to replace Him with. The vast majority of modern human beings would now be small-minded, stunted, pathetic creatures, possessing no sense of how to achieve greatness, only of how to accrue petty comforts and easy pleasures in a materialistic, self-obsessed world. In other words, if megalothymia went out of human life, so would greatness. Only base mediocrity would remain.

Fukuyama combined Nietzsche’s idea of the last man with his own diagnosis of underlying human psychology. His prognosis was that the outlook for post-History Western society was not good. It was possible that the last men at the end of History might sink down into a brutish contentment with material comforts, rather like dogs lying around in the afternoon sun (this was what Kojève predicted). But they might well go the other way. There was every chance that the last men (and women) would be deeply discontented with their historically unprecedented ease and luxury, because it failed to feed megalothymia. If the last men went this way, they would become bored by what Fukuyama called ‘masterless slavery – the life of rational consumption’. The spread of egalitarian values that went along with secular democratic politics would open up spaces of severe resentment – especially, we might now postulate, among those who had lost their traditional places at the top of social hierarchies, and felt cheated of the recognition that they believed they were owed. (Sound familiar?)

Anyway, of course the triumphalist interpretation was the one that found its way into our culture as the distillation of Fukuyama’s thesis. Why? Because that was what Davos Man made of it and Davos Man owns a lot of cultural assets with which to propagate his view. And Davos Man had a lot of money making to be getting on with – taxes to avoid, finance to be structured, workforces to be restructured.

This kind of thing always puts me in mind of what I think of as a collective id.

Why has ‘the environment’ somehow become the predominant form of complaint against our age? Certainly greenhouse gas emissions are a big deal. So it’s not all bad that environment is such a Big Deal. But green concerns have been a major consideration for all sorts of other, far less rational reasons and many of the things we do on behalf of the environment – like kerbside recycling – do little if any environmental good. Why do we do it? I’d say because it appeals to our subconscious in the same way that the idea that we were all sinners and should repent of those sins to save ourselves in the eyes of God was a major theme of much social and political pontification before the Enlightenment. The idea that economic growth can’t go on, that the Gods need to be appeased appeals to our subconscious desire to atone for our easy life, even though if we dematerialise economic growth of course economic growth can go on. And on and on.

In all this I think of the extraordinary Eglinton Tournament of 1839: 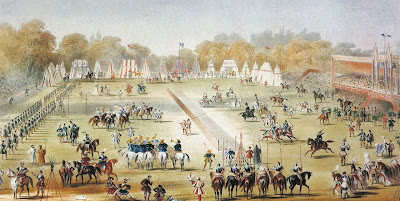 175 years ago, Archibald Montgomerie, the Earl of Eglinton (1812-61) resolved to provide what might now be called a ‘re-enactment’ of a medieval tournament on his estates in Ayrshire. A great fan of the turf (his jockeys rode in tartan) and of champagne (by some accounts he drank nothing else), Eglinton planned an event to complement a race meeting. It quickly snowballed in line with the overwhelming public response to the idea and thousands of people, many dressed in medieval fashions in accordance with Eglinton’s instructions, arrived at his estate via railways and specially-commissioned steamers in late August 1839. 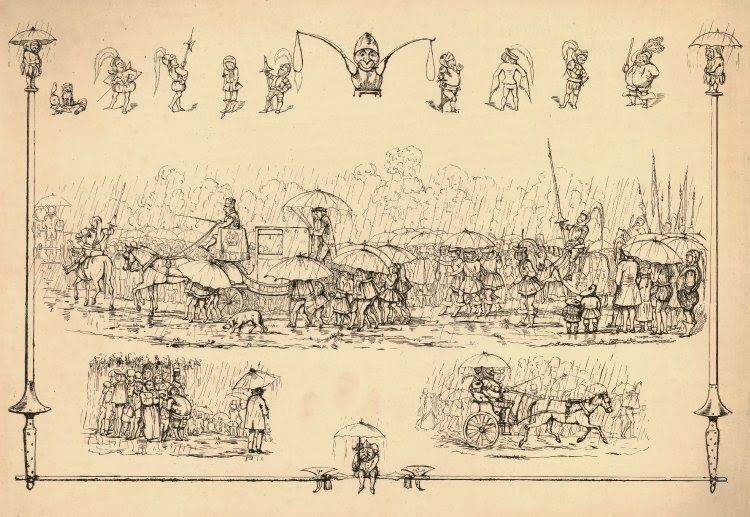 As we might expect, MPs and their families featured prominently in an event whose main aim was to provide models of proper behaviour for political and social elites. The Queen of Beauty was Lady Seymour, wife of the Whig minister and MP for Totnes, Lord Seymour. Large numbers of MPs and local political elites featured in both the house party that stayed at Eglinton Castle and the large crowd in the pavilions, which witnessed the action over the following days.

The dress rehearsals were held in London at a garden behind the Eyre Arms, St John’s Wood, a tavern close to Regent’s Park, the last one on Saturday 13 July 1839. Nineteen knights participated. The audience was invitation only; many of “the very elite of the most elite” (said the “Court Journal”) were invited to watch, and 2,690 attended. The rehearsal went perfectly. The weather was sunny, the banners and armour and tents impressive, the jousting successful. Even critics conceded that the tournament was likely to be a fine show.

A hundred thousand spectators are reported to have attended the actual event which was a fiasco. The tournament was pretty much rained out. One descendant of the Earl reports that his folly in spending £40,000 promoting the tournament “impoverished his family”. What (on earth!) was going on? Well the industrial revolution was going on, that’s what. People were streaming into cities where they swapped the traditional human bonds of the British countryside and its grinding poverty and oppression for the impersonal bonds of the city and the slightly less grinding poverty and anarchy of the slums. The representatives of a new discipline of ‘political economy’ were intoning gravely about maximising ‘utility’ in a manner similar to the way businessmen were calculating how to optimise their profit. They were preaching counter-intuitive and heartless doctrines that relieving the poor only encouraged them – only produced more poor as Charles Murray does today. None of this made any sense in the countryside where if one came upon a beggar one might help them in some way without having twenty more knocking on your door to make merry with your charity within a few days.

And as this soulless dystopia that was brewing within the burgeoning cities of the UK, a utopian golden age of heraldic medieval chivalry erupted from the collective unconscious into the zeitgeist – a world where humans dealt with each other person to person – where a Lord could be respected as upholding the good along with all his power and the hoi polloi were respectful of all this lordly goodness. How much of this was true was kind of beside the point. It was truthiness itself in the age of Mr Gradgrind. And so Walter Scott churned out novel after novel imagining this golden age. And more gothic churches were built in the five decades following the Eglinton Tournament than had been built in the previous ten centuries.1

Anyway, it makes little sense, but that’s why we put our garbage into two streams to protect the environment but abolish carbon pricing which jeopardises the planet, why we acknowledge the traditional owners of the land on which we meet, their elders past and present, but spare ourselves the trouble of really engaging with their problems, and so on.

This entry was posted in Art and Architecture, Cultural Critique, History. Bookmark the permalink.

2 Responses to Travesties of the proverbial: Fukuyama and the id of history