Crimes against empathy: Where are the stories? I’ve weighed in previously on the relentless emphasis on symbolism in the political prosecution of aboriginal issues in Australia. This isn’t necessarily a criticism of aboriginal activists because, as I argued, they’re working within the rules of memefication. I can add that, where there was virtually no aboriginal history for me at school, my kids got nothing but. Pretty much every year of their schooling they did some classes in aboriginal history. But the teachers were never engaged and they learned very little other than to dislike such fare for its vacuity, sentimentalism, it’s lack of imagination or interest. And, of course, its repetitiveness.

In any event, for some reasons – perhaps explicated to some extent here – I think quite a lot about the tragic relationship between Europeans and aboriginal people, though I have no well thought out ideas about what should be done today. I’ve read various books like Inga Clendinnen’s marvellous Dancing with Strangers and Peter Sutton’s sad meditation The Politics of Suffering. I’ve read Watkin Tench and various others. And yet SBS’s show First Australians, has been a complete eye-opener for me. Turns out the program is quite old – going back to the year of the apology – 2008.

In any event it’s must viewing for all Troppo readers. Yes this means YOU!

I’ve now watched the first five episodes all of which are riveting. It is also the case that it’s written from a largely aboriginal perspective – it doesn’t get into the culture war argy-bargy of Keith Windshuttle or Peter Howson’s argument that the stolen generations were really the ‘rescued generations’. If one is seeking to apportion blame then there is probably a something to be said for injecting a somewhat more understanding explanation of some of the white conduct that shocks us the most today. Many of the crimes of empathy committed against aboriginal – or particularly ‘half-caste’ children were committed against ‘disadvantaged’ children all round the world and were part of a very different attitude to children. But it’s a small thing in a program that is seeking to present the aboriginal experience.

I knew the bones of first contact – the first episode – from Clendinnen’s book and other reading, but it was compelling nevertheless. I knew of the destruction of the Tasmanian Aborigines but only barely, having picked up this nineteenth century excuse for their destruction – that they were the most primitive people on earth – listless. You’d be a tad on the listless side if what happened to them happened to you – trust me.

The fourth and fifth episodes are about the logical consequence of economically developing the ‘outback’ without the slightest regard for the native inhabitants’ prior occupation. As the cattle routes were opened up they destroyed the aboriginal water holes and their way of life and the indigenes hit back with violent resistance – which was brutally crushed. (I kept thinking it wouldn’t have been that hard – probably would have been cheaper – to have engaged with the indigenous people to figure out how to protect what they wanted protected and go on with the cattle trade. I don’t know enough to know if something like that might have been possible by fully acknowledging an aboriginal veto right to development – I suspect it might have been, but if that wasn’t possible then it would have had to have been a heavier handed affair – but still not one that led to the agonies of the destruction of whole peoples that set in then and continue today.)

But the episode that moved me the most was the one with the least violence – just as I Daniel Blake, where the poor and the weak in society end up being done in by bureaucracy rather than anything as straightforward as physical intimidation or poverty. Episode three presents the story of Coranderrk – a story in which aborigines did everything humanly possible to succeed in the new circumstances – and did – only to be done in by the indifference of white society to their achievement and the relentless small-mindedness of bureaucrats charged with ‘aboriginal protection’.

Turns out I spent quite a bit of time at Coranderrk as a kid without knowing it – whenever I visited Healesville Sanctuary. It was built by two succeeding ngurungaeta – principal elders – of their community of great vision and humanity. They accepted European ways right down to adopting European clothing, names – Simon Wonga and William Barak and the Christian religion. They had the help of a remarkable Scottish man of the cloth and together they built their land into a thriving and highly profitable agricultural community. Coranderrk’s success became an embarrassment to those in charge of other aboriginal settlements and so it was gradually closed down in the most callous way.

The community was lied to, promises made to it to allow it to spend the surpluses from its agricultural production on social goods like a hospital completely disregarded and eventually set upon with genocidal intent (of the nicest kind mind you – no death camps for us). From Wikipedia:

As a result of the Aborigines Protection Act of 1886, around 60 residents were ejected from Coranderrk on the eve of the 1890s Depression. Their forced departure crippled Coranderrk as an enterprise, with only around 15 able-bodied men left to work the hitherto successful hop gardens.[8] Almost half the land was reclaimed by government in 1893, and by 1924 orders came for its closure as an Aboriginal Station, despite protests from Wurundjeri returned servicemen who had fought in World War I.[3] The reserve was formally closed in 1924, with most residents moved to Lake Tyers Mission in Gippsland in eastern Victoria. Five older people refused to move and continued living at Coranderrk until they died. The last known Aboriginal woman to live at Coranderrk was Elizabeth (Lizzie) Davis, who died in 1956, aged 104. She was denied permission to be buried at Coranderrk alongside her husband and siblings.

Sounds like a story worth telling. Yet it took till 2011 for a plaque to be erected at Healesville Sanctuary. Thanks guys. Anyway, that could have been taught to my kids. I was lamenting this to a friend recently on a walk to the MCG one day when he noticed we were working on the William Barak bridge – the walkway from Fed Square to the G. So some people are trying. Barak himself was a truly remarkable person. A diplomat he worked away to get what he could from the authorities. The Governor was quite well disposed but the Board for the aborigines Protection were relentless once they moved to diminish Coranderrk. The Governor asked William Barak if he could see a corroboree which Barak wanted him to see, but the Board wouldn’t hear of it. The Governor eventually got a painting of a corroboree by Barak. All this time while he wore western clothes and participated in Christian religion, he’d been painting his old life. His paintings, now much sought after, are a remarkable affair in their hybridism between European and indigenous sensibilities. I’m no expert – perhaps this kind of thing wasn’t that rare in the 19th Century – but I’m unaware of anything similar until the paintings that emerged a century later at Papunya.

Here’s an extract from the The Australasian towards the turn of the twentieth century (1897) and six years before Barak’s life ended – as a noble leader of his people, as diplomat between them and the people who spoke of protection but who showed in their actions a criminal disregard for such a thing, and as a brave but broken man spending his final days recording the world he had known as it passed into oblivion.

It’s a terrible, terrible story to make you weep at our small mindedness in the face of the grandeur and the potential we set our faces against at every turn. And I wandered around Coranderrk as a kid looking at the platypuses and other critters. We didn’t really have to do any favours to the people of Coranderrk for them to have succeeded at least for a time and in so doing show us things we could never have known. And now we never will know. Instead we actively destroyed William Barak and his people. And we live with the consequences with very little clue about how we might make amends for such crimes.

Having written the last sentence last night I’ve just discovered more Barakiana hiding in plain sight and towering over most of Melbourne! Another huge demonstration of my own ignorance – a veritable terra nullius in my own tiny mind. In 2015 there was a 32 story apartment block unveiled (they covered it up until finished – Christo eat your heart out!) with Barak’s portrait etched into the articulation of the balconies. It sits subversively behind the Anglican Cathedral in the line of sight down Swanston St from the Shrine of Remembrance and of course I’ve seen it plenty of times without noticing or thinking. 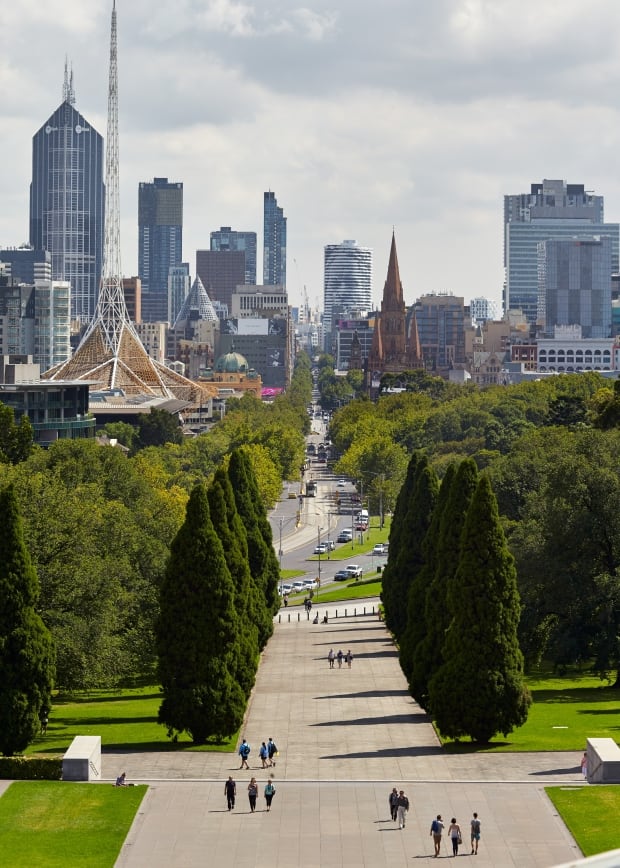 Ironically I got this from a Canadian website. Meanwhile one correspondent for the Conversation is not a happy camper because the building houses luxury appartments.  Here’s a lengthier piece on aboriginal monuments generally, but which focuses on the Barak building. 1

In any event, First Australians is a magnificent series of documentaries which I can’t recommend highly enough.
This entry was posted in Art and Architecture, Cultural Critique, Indigenous. Bookmark the permalink.

35 Responses to Crimes against empathy: Where are the stories?