Doughnut economics: The hole is greater than the sum of its parts 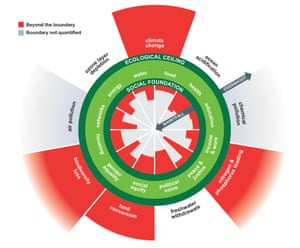 Rene Descartes eat your heart out: The diagram that changed the world.

A friend wondered aloud on Facebook what I thought of Doughnut economics pointing me to this article by George Monbiot. My reply is reproduced below, but before that, a little hyperventilating from George.

Such proposals are familiar; but without a new framework of thought, piecemeal solutions are unlikely to succeed. By rethinking economics from first principles, Raworth allows us to integrate our specific propositions into a coherent programme, and then to measure the extent to which it is realised. I see her as the John Maynard Keynes of the 21st century: by reframing the economy, she allows us to change our view of who we are, where we stand, and what we want to be.

I quite like Monbiot but this is ridiculous. I haven’t read the book, but it’s a DIAGRAM for chrissake. There’s precisely nothing in what Monbiot has said that is in any sense new or even interesting – and I’m broadly sympathetic to his antipathy to neoliberalism as I indicated here and of course the diagram is wholly inoffensive, in so far as it makes sense.

Firstly the ideas in the article, from what I can see are pure ‘strategisation’ in the sense that I elaborated on the word here. Secondly the idea that we need a new framework to pursue this vision – when the vision is thoroughly ho-hum (intellectually I mean – we all know it hasn’t been implemented, but that’s not because there was no framework there, it’s because of power structures and the fact that many of those who claim to be on the side of the angels are having a bob each way – that includes voters who vote against OTHERS emissions, not their own and political operatives who are on the side of the angels, but also on the side of their own careers.

Thirdly this isn’t a new intellectual framework. It’s an old intellectual framework with a diagram and a book attached – standard marketing tools. It’s true I’ve not read the book, but don’t you think that if it was a new framework I’d notice? Certainly if it was the 1930s and Monbiot was summarising Keynes in a newspaper article, I’d certainly notice that it was a new framework – not a new diagram.

Fourth, notice how the framework supports ALL of the priors of those who support it. Frameworks if they’re any good often throw up embarrassments – that illustrates that they have intellectual integrity because they lead to at least SOME places that their sponsor or their epigones might not have thought.

So I think the left should stop hyperventilating and own their failure. I for instance have been writing stuff trying to expand a useful centrist/cum progressive framework for years. As for instance in this piece. But it doesn’t have diagrams and it’s not in a book. It doesn’t compete in the schlock stakes so it’s easy to pass up compared with a cool new breakthrough diagram.

Anyway, here’s a prediction. In about five years no-one will remember this wheeze, or if they do it won’t’ be for any deep theoretical insights.

I am and will always be Not Trampis

Precisely. Just there to keep you on your toes Trampis. Now fixed.

Monbiot is not an economist. Neither am I, but I find the diagram at least makes puts the existence of physical limits and the operation of externalities into the context of growth that mainstream economics wants to wish away or pretend is a minor element.
I’m yet to see any real engagement with the potential magnitude of the risks being created by our current approach to pollution. The science is inexact, but the media is focussing on the lower end of the risk range and completely discounting the higher end – and they are doing this with no basis except some phoney “balance” between contrarian cranks conducting no research and producing no results and scientists working under constraints of a method. This is not some left/right positional issue where the “truth” lies in the middle.

The fetish for “revealed” preferences and “growth” that has become internalised needs to be challenged.

But I’m finding it hard to work out why you think the diagram might change these things.

because locating the economy within the natural system is seemingly obvious to everyone except those trained in economics.

Suburbanite, I hear economists talking about those outer-circle issues all the time. Economists played an important role in the Montreal Protocol process, the world’s most successful environmental agreement. The economists I know talk about climate change with more understanding than most people.

Maybe I’m moving in the wrong circles. But an alternative hypothesis is that straw-manning is an actual thing.

So we don’t need it for those not trained in economics, but the diagram will help people understand those basic ideas like that we live in an environment and a society.

I think your link proves my point. Some of them venn diagrams were the environment figures alongside the economy rather than one inside the other and the others demonstrate no flow between them. The problem is that the economy is not just inside the environment, but that it’s services and resources are either valued narrowly or not at all. I’m glad you are so sanguine about the current state of affairs.

Where did I say I was sanguine about the current state of affairs?