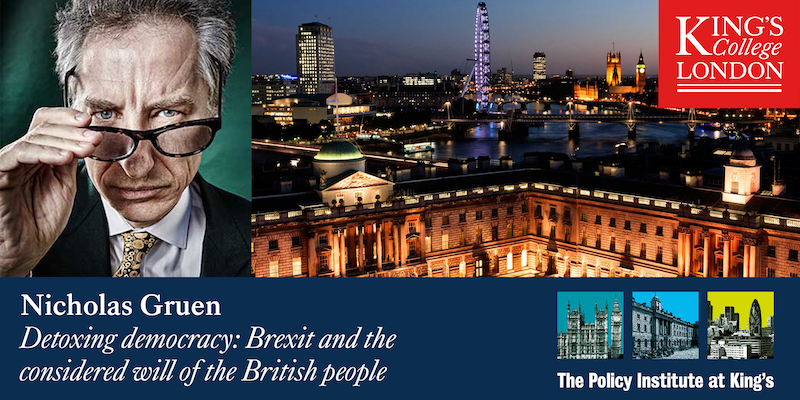 As readers of my Twitter feed will know, I’m heading to London to give some seminars. One on the use and abuse of wellbeing to target policy at LSE, one on evidence-based policy at King’s College London Policy Institute and a public lecture titled “Detoxing democracy: Brexit and the considered will of the British people.” I thought I’d record the abstract and a brief outline of the argument here. If you know anyone who might be interested and able to attend, please let them know. They can register here.

Though material conditions played their part, the degradation of politics now so evident in the shock and awe of Brexit and Trump also reflect the way in which elections orient politics around political combat, rather than deliberation and problem solving. Yet Britain could use the ancient Athenian idea of selection by lot – choosing a cross-section of the public to deliberate together to complement elections – to turn its slow-motion crisis into the rebirth of democracy, moving it from government according to the will of the people, and towards the richer, safer notion of government according to the considered will of the people.

An outline of the argument: Detoxing Brexit by detoxing democracy.

Britain’s governing class is now engineering a tragedy that arose from a piece of political improvisation gone horribly wrong. Yet there’s a principled way of handling the situation.

A citizens’ jury – chosen to be representative of the electorate – is exposed to each side of the debate and then deliberates. By this process, the will of the people is transformed into their considered will. The evidence suggests that this will produce a substantial swing towards the remain position perhaps as much as 15%.

In my public lecture, I’ll propose that we raise the funds to host at least ten citizens’ juries of approximately fifty people each chosen by lot from their local communities around Britain to be held simultaneously over – say – two weekends.

The process would be overseen by a board of respected citizens with differing views about Brexit who commit themselves to the integrity of the process.

For me the crucial thing is not Brexit itself – as important as that is. If my fears are right, I doubt Brexit could harm the economy by more than – say 2%. And there are plenty of things in life worth sacrificing 2% of one’s income for. Indeed, after the dismal way the Greek crisis was handled by Europe, there’s some justice to the Brexit vote – though my own view is that, remaining outside the Euro, Britain has the best of both worlds.

The tragedy of Brexit is that, the way things have been handled so far, whatever Britain does, around half of its population will resent what happens as illegitimate.

Given this, I would hope that the ‘deliberative referendum’ I’ll propose would be conducted with grave humility and generosity by those seeking a change of mind. They might commit in advance to accepting Brexit if the process does not indicate that the considered opinion of the British people is against Brexit by at least the margin by which Brexit won the referendum.