Below is an extract from a recent academic article setting out – rather laboriously I have to say – three ‘theories’ – I’d rather call them ‘ways of seeing’ what banks do in our financial system.

It’s worth reading, though it’s nightmarishly repetitive and a little reductive. I’m not sure that examining accounting treatments necessarily proves the authors’ point, but then it’s a lot more scrupulous view of things than is practised in most discussions of banking – including by banking authorities who often imply the first theory. And even amongst policy makers this seems to be a pretty well kept secret. As the advocacy group, Positive Money in the UK uncovered “84% of British lawmakers don’t know that banks create money when they lend”.

In this context the Bank of England is alone amongst similar institutions as far as I know in nailing its colours to the mast:

In any event, this stuff is exciting and important.

So I thought readers would be interested in how Credit Suisse attended to an urgent capital adequacy matter by creating money, lending it to Qatar and then having Qatar invest in the bank. Nice work if you can get it. Accordingly I reproduce Section 5.2.1 from the article I mentioned at the outset.

How to create your own capital: the Credit Suisse case study

The link between bank credit creation and bank capital was most graphically illustrated by the actions of the Swiss bank Credit Suisse in 2008. This incident has produced a case study that demonstrates how banks as money creators can effectively conjure any level of capital, whether directly or indirectly, therefore rendering bank regulation based on capital adequacy irrelevant: Unwilling to accept public money to shore up its failing capital, as several other major UK and Swiss banks had done, Credit Suisse arranged in October 2008 for Gulf investors (mainly from Qatar) to purchase in total over £7 billion worth of its newly issued preference shares, thus raising the amount of its capital and thereby avoiding bankruptcy. A similar share issue transaction by Barclays Bank was “a remarkable story of one of the most important transactions of the financial crisis, which helped Barclays avoid the need for a bailout from the UK government”. The details remain “shrouded in mystery and intrigue” (Jeffrey, 2014) in the case of Barclays, but the following facts seem undisputed and disclosed in the case of Credit Suisse, as cited in the press (see e.g. Binham et al., 2013):

The Gulf investors did not need to take the trouble of making liquid assets available for this investment, as Credit Suisse generously offered to lend the money to the Gulf investors. The bank managed to raise its capital through these preference shares. Table 11 illustrates this capital bootstrapping (not considering fees and interest). 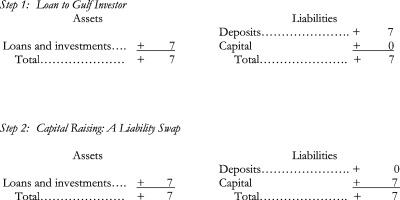 Since it is now an established fact that banks newly invent the money that is ‘loaned’ by creating it out of nothing, the loan to the Gulf investor created (in step 1) a simultaneous asset and liability on the bank’s balance sheet, whereby the customer’s borrowed money appears as the fictitious customer deposit on the liability side, of £7bn. Considering the same change in step 2, but now after the liability swap, we see that the newly issued preference shares boost equity capital: They are paid for with this fictitious customer deposit, simply by swapping the £7bn from item ‘customer deposit’ to item ‘capital’. Credit Suisse is then able to report a significant rise in its equity capital, and hence in its capital/asset ratio. Where did the additional £7bn in capital come from? Credit Suisse had lent it to the investor, using its own preference shares as collateral, and hence had invented its own capital. The risk to the borrower was also limited if the Credit Suisse shares, not other assets, served as collateral.

As has been pointed out (Werner 2014c), in the UK such actions would be illegal, as they violate Section 678 of the Companies Act 2006 (Prohibition of assistance for acquisition of shares in public company). However, the Swiss regulators were happy to tolerate this. The transgression is clearly graver in the case of a bank, compared to an ordinary firm lending to an investor to purchase the firm’s shares: Credit Suisse had not merely lent a prospective shareholder the funds to buy its shares, but it created the funds out of nothing. A very similar transaction involving similar amounts and also Qatar as investor is alleged to have been undertaken by Barclays Bank in the UK, allegedly also involving an upfront ‘fee’ paid to Qatar of £322m, which could be a refund of the interest on the loan. The role of interest is a topic not discussed in detail in this article. In such a transaction, Barclays would likely need to charge interest on the loan, in order for it to appear as a regular deal. If the Gulf investor was acting as a strawman for what amounts to an internal accounting exercise to create the bank’s own capital out of thin air, a part or all of this fee could have been the refund of the interest on the loan, so that the investor would not even have to pay interest for receiving the newly created money and with it the preference shares.

According to analysts at Italian bank Mediobanca, such bank loans to new bank share investors were a “fairly common practice… during the crisis”, whereby Credit Suisse may have been unusual in disclosing this and obtaining regulatory approval. Either way, banks in this way created their own capital out of nothing, thus making nonsense of capital adequacy regulations.

We learn from this that under the right circumstances it is possible even for an individual bank to show almost any amount of capital to regulators. It is even more easily possible for the whole banking system collectively to do likewise, without directly contravening the Companies Act. Since during boom times an increasing amount of money is created by banks (hence the boom), some of that can be syphoned off by banks to bolster their capital by issuing new equity. The regulators seem unaware of this fact, as their descriptions of banking reveal them to be adherents of the erroneous financial intermediation theory of banking.

nice example, very clear. The financial intermediation story is the main nonsense story I hear many top economists adhere to. That is because understanding money is often too hard for them, so they switch from the problem that money has public aspects to the much simpler private good story of an intermediary sitting between someone with purchasing power who wants to invest and an investor. Much easier to understand, but unfortunately only a very limited part of banking. Money is bloody complicated.
Paul

Which is one more argument for having the state generate the new money and return the profits to the state, rather than this being a slightly hidden subsidy – the underwriting is done by the taxpayer in either case.

I can’t remember who I first read that from, you or ProfQ (provider of cunning facts and well-wrought opinions to secret agents?)

It seems the picture Richard Werner presents in this example (presumably unintentionally) is somewhat misleading.

According to the FT, the loan provided to Qatar was not only approved by the Swiss regulators but also encouraged by them. It was an interim loan repaid within weeks, which had always been the plan:

“In Credit Suisse’s case, the loan to pay for a significant amount of the private placement was used to bring forward the capital increase by a few weeks so that it could be announced at the same time as rival UBS’s state bailout.

It came about because Switzerland’s regulators wanted to avoid weeks of market uncertainty over Credit Suisse in the aftermath of the UBS rescue package.”

Thanks for the correction Ingolf, but saying the Swiss regulators wanted it to happen doesn’t seem to be a very powerful point. They didn’t want a Swiss bank to go broke even when it was insolvent. Are you saying they were happy to have a few weeks of dodgy accounting because they always knew it would be unwound?

Happy mightn’t quite be the right word, but basically yes. As we know, extraordinary actions were common during this period. The larger point was that this sort of legerdemain, as one should expect, was recognised by the Swiss authorities as inappropriate.

OK – thanks for the clarification. I appreciate your point now.

Exciting and important but not exactly new. Catallaxy had threads of doom on the subject a dozen years ago.