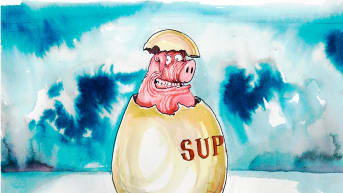 What would Abraham Lincoln think of the Productivity Commission’s report into Australia’s super system? A funny question I know, but amongst his charms those eight-score years ago was a lively interest in economics and an original mind – seriously.

He had his head screwed on when he said that government should “do for the people what needs to be done, but which they cannot, by individual effort, do at all, or do so well, for themselves”.

In this spirit, Lateral Economics made a submission to the Commission proposing to ideologically ‘complete’ the idea of competitive neutrality – a term first coined right here in Australia when we led the world in competition policy reform from the early 1990s.

Competitive neutrality as currently understood requires that, if they compete with private firms, government enterprises should compete on a ‘level playing field’ with any unfair advantages – for instance in tax and planning – neutralised.

But as I proposed over two decades ago we should also take the converse idea seriously – that where governments are invested in providing services exclusively to some special group, anyone should have (unsubsidised) access to them.

So, given governments provide employee super schemes, we should all be able to access them. With super compulsory and the sector pervaded with market failure, this solves lots of problems.

Just as Medicare is an ‘informed purchaser’ and supervisor of sophisticated medical services, so government owned super schemes — like the Future Fund — can be informed purchasers of investment management services on our behalf. This interdicts many of the channels through which private financiers would otherwise feed their avarice – at our cost.

The Commission’s Draft Report was none-too impressed with my suggestion, pointing to Sweden where a Government provided fund gained huge market share – by delivering strong returns. If only Australia’s super system could have more policy problems like that!

In any event while restating its concerns, the Commission’s Final Report reverses course, proposing that government owned funds be eligible to make the ‘best in show’ shortlists from which it proposes Australians choose their fund.

Still, channeling my late friend Abraham, I’d like to see two more changes. As I documented over six years ago, the regulation of self managed super funds (SMSFs) exquisitely combines vast expense with dysfunction in achieving its prime regulatory objective – safeguarding integrity.

Rather than build simple regulation around the needs of small family super funds, the regulation mandates a cut down version of the regime governing multi-billion dollar funds. This involves families disgorging thousands each year to professionals – to draft trust deeds, investment strategies and regular minutes of fictitious meetings all bemusedly signed by Mum and Dad.

Other professionals earn thousands auditing the fund each year. For most SMSFs all this could be handled at a fraction of the cost, as our taxes are, via self-assessment subject to risk targeted random auditing by the ATO.

And here’s the thing; for all its expense, the whole system actually facilitates the very thing it should be guarding against. Because what protection it offers against poor investment choices or malfeasance is delivered through this thicket of professional documentation, it’s not a problem for spruikers who travel, like piranhas, in schools. They’ll connect Mum and Dad to professionals who’ll draft or re-draft their investment strategy and ensure their investments comply with it – to facilitate their high-risk, high-fee schemes.

You’ll understand, gentle reader, that when I read the PC’s sub-heading “SMSF regulation is appropriate”, my gob was truly smacked and smacked again, my ghast utterly flabbered.

Abraham’s advice on governments doing what we can’t do for ourselves leads me to one other conclusion. Decades ago ‘defined benefit’ super funds guaranteed their beneficiaries specific benefits with the funds bearing all the risk on investment returns. This was unwise and unsustainable. But we’ve swung too far in the opposite direction, with ‘defined contribution’ schemes that load all investment risks on beneficiaries. Too bad if you’re in an unlucky generation which experienced unuaually low returns.

Government – and only government – could offer an insurance product for super funds to dampen their beneficiaries’ exposure to systemic risk. For illustration’s sake, up to some cap for each person, for every $1 of premium paid annually, government might pay $15 in the event of some specified period of sufficiently poor performance of a representative basket of investments.

Rather than being welfare, this would be a trade for risk-taking. Premiums would be calculated to generate some expected profit in return for risk borne.

This is a win-win. No-one need buy the insurance, but those who did would be advantaging their beneficiaries. And, though it would take large losses occasionally, in any period the government would expect to bolster its budget bottom line.

Any of our political parties could grab hold of the policy. Rather than deplete their budgetary war chest for the election, it would add to it. I can see it now. Superannuation of the people, by the people, for the people. Win-win-win.