Pedantry is not its own reward – and it’s certainly not ours!

Posted on November 4, 2019 by Nicholas Gruen 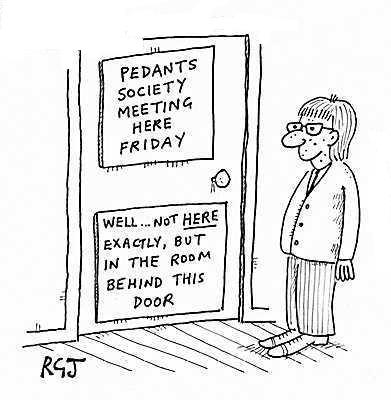 Pedantry is alluring. Especially if one gets some aesthetic satisfaction from the way words are used. Take “begs the question” for instance. I love this term because it is such a simple, chummy way of naming something that’s maddening in is subtlety. To beg the question in its traditional meaning is to mistake the form of answering a question for its substance. One ‘answers’ the question by simply asking it again in another guise.

This can be the product of deliberate deception. But in my experience, and in some ways more maddeningly questions are begged more often by people deceiving themselves. They conclude their ‘explanation’ with great satisfaction, blissfully unaware that their explanation is no explanation at all. Here’s an example of begging the question – which involves answering a question by asserting its premise in different words.  From Wikipedia.

To allow every man an unbounded freedom of speech must always be, on the whole, advantageous to the State, for it is highly conducive to the interests of the community that each individual should enjoy a liberty perfectly unlimited of expressing his sentiments.

Today, ‘begs the question’ is much more often used to mean ‘prompts the question’. “The minister says he wasn’t at the lunch, which begs the question ‘Where was he?'” This was a mistake a few decades ago. It pisses me off that it’s not still a mistake. But there you go. Language moves on. A small aesthetic diminishment of the language and that’s it. I don’t use ‘begs the question’ in this way that I dislike but I don’t pull people up on it either. Language is a socially given thing.

I recall a friend of my father’s objecting to the world ‘hopefully’ as in ‘hopefully nothing bad will happen to us’. If you think about it, other than its familiarity, this usage is a bit odd. Because it’s an adverb with an absent verb [I’m no great shakes at grammar so I won’t be surprised if someone corrects anything in this last sentence]. The more logical way to put it is “we are hopeful that nothing bad will happen to us”. But here’s the thing – well two things really:

But there’s a long tradition of schoolmarmish finger-wagging about precisely this kind of thing as occurred in this Age column by Stephen Downes. The author takes exception to people using the word ‘multiple’ to mean ‘many’. Like ‘hopefully’, I can see the logic in his point, but so what? I use the word in the way he deplores. With him having pointed it out, I might take to the aesthetic of being more pernickety about it. But so what? Others certainly won’t so it’s a lost battle already and, much more to the point a battle that’s hardly worth anything.

After the finger-wagging in Downes’ column George Orwell is inevitably trotted out warning that sloppy language is a step towards the gulag. The thing about George Orwell is that he was writing about something very serious which is the control of language by power, about certain idioms that render the things that need to be said unsayable. As he said – or words to this effect – the creation of a situation where speaking the truth becomes a revolutionary act.

I can give you an example. I was collaborating on a two-page explanatory memo for an enterprising bureaucrat somewhere in the world who was keen on explaining my idea of an Evaluator General. I wrote that it was to “nurture and protect a culture of truth-telling”. But she wouldn’t have it. “We can’t say that”, she said. You’ve probably already guessed why not. Because it implied that there wasn’t a culture of truth-telling. And truth-telling was already hot and strong in the agency she worked for. Why it was in the corporate values (OK: I made that last bit up, but it may well have been in the corporate values.) The point was, she didn’t feel comfortable writing that in the briefing. That illustrates in simple and concrete terms, Orwell’s point – and the power of Orwell’s point. We’re dealing with a serious and difficult subject which, if we are to give it its due, will make demands on us.

In any event, if people are going to wag their finger to talk about good writing, as Stephen Downes does, they could surely give us some good writing. They should surely make the case with some compelling worked examples leaving us thinking – ‘yes this matters and now I know why’. Is this vivid?

Using multiple is just one way in which the media is diluting its impact. If journalists’ writing was more succinct, more articulate and more consistent grammatically, it might also be more powerful. When – not, “At a time when”, you’ll notice – governments, commerce and organisations of all sorts are stifling the truth, writing with bite is the only antidote.

That paragraph is actually hard to take in. The beginning of the last sentence needs to be read several times – at least I had to read it several times. But that’s not my main objection – which is that it makes a claim about “writing with bite”, proposes it as an antidote but the writing is sloppy and vague. Not much bite! In this piece, I try to explain with a precise example what I object to about a corporate value that specifies “honesty in all we do and say” and try to show how that statement itself becomes the apex deception. As I put it:

There’s something creepy about calls from on high for “honesty in all that we do and say” while the routine deceptions of everyday life, both petty and otherwise, proceed apace.

Well, apologies for my tastelessness in quoting myself as a good example – I’m short on time. Commenters can no doubt offer much better examples – there are plenty in Orwell. Don Watson is hilarious and fun – my attempt at ridicule is here – but also a bit disappointing.  Satirising something has some value in itself as social action. It can also be implicitly forensic. Watson’s stuff is brilliantly, hilariously written of course, but it left me a bit disappointed for not homing in on its quarry with sufficiently forensic analysis.

But spare me the finger-wagging without a cause. Downes’ concrete examples of what he anathematises all end up in the same place. After ‘multiples’ we get the use of surplus words and expressions like ‘now’.1 Then we get a nice general wave of the arms:

Weak writing means feeble thinking. Yes, we know what the writer meant in the sentences above. But in writing badly, he or she is signalling a lack of interest in precision, in lightening the readers’ load, in conveying meaning. She’s telling readers that she doesn’t care enough to pick the most powerful verbs, call things by their proper names and write her words in the correct order, the most common characteristics of weak prose. Poor writing also demonstrates to the powerful – to politicians, big business, lobbyists and the malevolent – that we don’t care enough about our thoughts and ideas to aim them accurately. They are easily deflected.

Thoughtful writing is strong and eloquent. I doubt that it has ever been needed more.

It’s two stars from me (and three and a half from Margaret).

This entry was posted in Cultural Critique. Bookmark the permalink.

21 Responses to Pedantry is not its own reward – and it’s certainly not ours!