Now and then one should look up and see if there are any trends that are not usually talked about in the media but that say something big about how humanity is going. I here want to briefly discuss the latest data on four big trends: war, food, (hunger?) deaths, and inequality.

On the question of the severity of current conflicts, wikipedia is pretty good as its entries seem to get populated by the right people (peace institutes and conflict monitors). The key graph on what has happened in the last 6 years, including 2020 is here on the left.

This graph shows you the estimated number of conflict-related fatalities in the world’s 17 deadliest conflicts. So the colours in each bar tell you the total number of deaths that year from a particular conflict that has made that year’s top 17. Of course the number of different conflicts that made it in the top 17 is larger in the 6 years depicted because some conflicts were not in the top 17 in each year, meaning there are close to 30 conflicts shown in this graph (which makes the colour scheme difficult!). The place to look for world food prices is the FAO, which produces indices for many types of food. The key graph on what has happened the last 15 months is to the left which show you the movement in real terms of food prices for particular types of food.

The graph tells an alarming, but not unexpected story. Food prices have gone up: the ‘aggregate index’ rose 30% the last 15 months. The rapid rise the last few months is particularly worrying, even more so since the fastest growing prices are those that are relevant for the poorest in the world: those relying on cereals (up 20%), vegetable oils (up 100% relative to the index april 2020), and sugar (up 60%).

This really is a dramatic development, heralding the potential deaths of tens of millions of poor people around the world (as the FAO itself started warning about since late 2020 and again warned about recently). Think of this graph in the light that the economic recession caused by covid-policies is, according to the IMF, turning particularly uncertain for the poorest countries. It is absolutely gut-wrenching to think what this graph means for the plight of the poorest in the world.

On March 18th 2020 here on Troppo I warned how the economic recession due to the panic then was condemning 10 million poor people to death. This FAO graph makes grim reading in that light. Indeed, the large excess death not explained by covid in poor countries the last 12 months makes one fear those foretold 10 million deaths might have already happened and be a vast underestimate. The Economist magazine recently estimated that developing countries already lost up to 10 million more people than covid explained. There are of course lots of conflicting claims what these 5-10 million died of and whether the statistics are good enough for poor countries anyway. So there will undoubtedly be much false claims and political posturing in coming months and years before it truly becomes clear whether the world has already lost 10 million people due to collapsing from malnutrition and poor health, or whether it didn not happen at all, or whether it happened but was due to other causes (including covid). I personally fear that the calamity I anticipated last March has been happening the last 6 months and is accelerating right now (there in that regard many worrying in depth reports from India). The FAO food price graph makes me fear the worst.

The nightmare is thus that the world is thus in these very months losing tens of millions of poor people due the economic disruption from all the severed economic networks due to the lockdowns combined with increased authoritarianism that is making movement and health care difficult (which is what causes famines): as the UN just said, “People are not starving – they are being starved”. If it is clear in hindsight that those political choices, copied in other countries when the West instigated them, lead to disrupted food production and an inability of the poor to buy food, then I fear the current period may well be remembered in the West by our grandchildren as “Our Great Shame”. But let’s hope for the best. The increasing food prices are a huge worry, particularly combined with that IMF data on what is projected for the economies of the poor world. 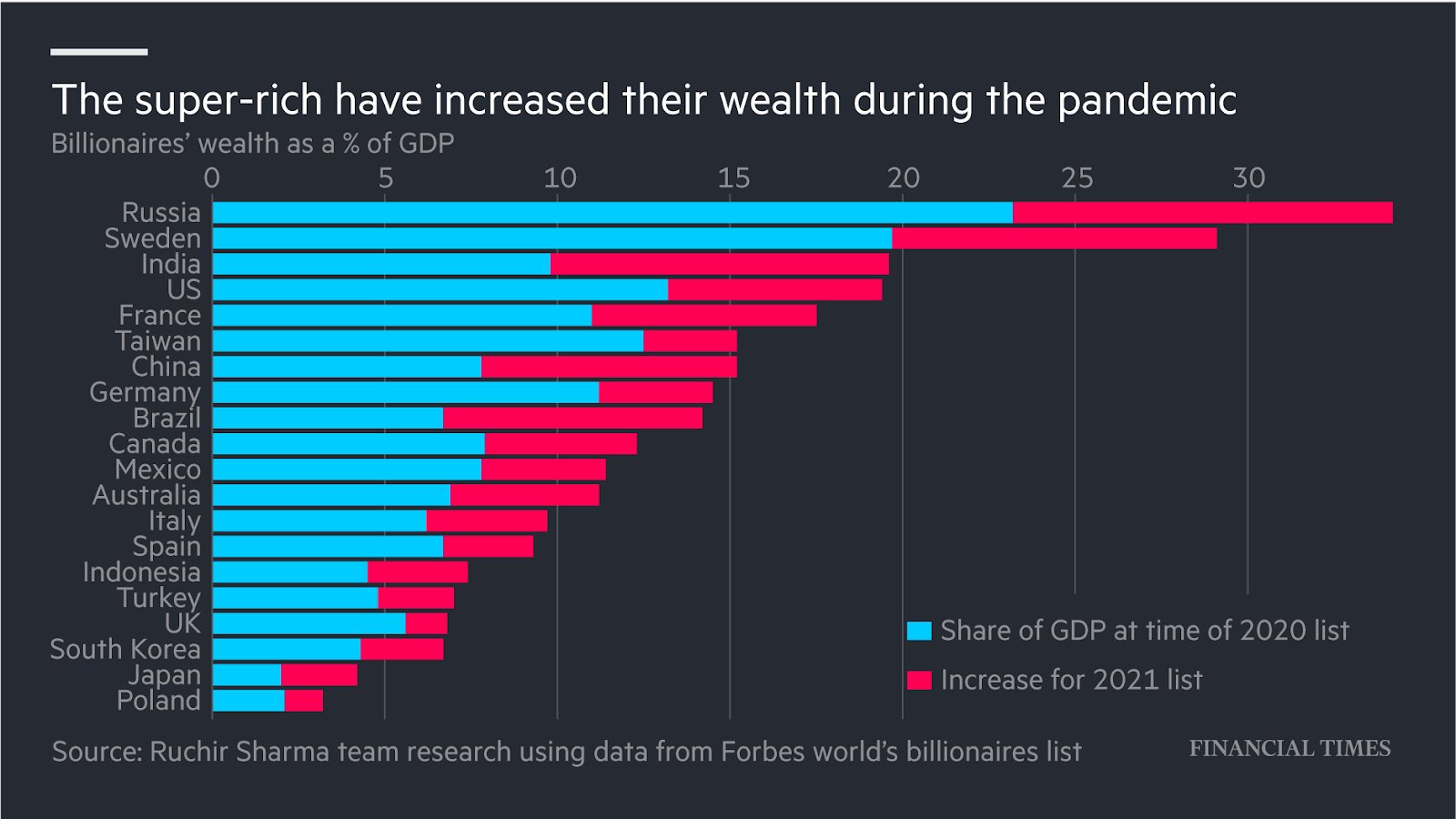 The Financial Times is always a good place to look for interesting stories on growing inequality. The graph to the left is what they reported on the growing amount of wealth owned by the billionaires.

The underlying FT story effectively says much of the money printed by central banks has ended up with the billionaires, and that the various avenues in which that has happened have had different effects in different places. The graph essentially tells you that, whilst the world economy shrank 3% in 2020 according to the IMF (a decrease they call the Great Lockdown, making it clear what they think caused the downturn), the billionaires gained some 30-50% wealth.

As I recently said, barons with huge political power and wealth are rising. A kind of new feudal system is taking shape under our very noses, something you can also tell from the stock markets. The world’s poorest are worst hit whilst the rich are getting richer. But at least in 2020 that hasn’t yet lead to more wars. 30,000 less dead from wars than a year earlier is something to celebrate, though 5-10 million more dead from causes yet to be convincingly (though a famine and general health crisis is underway right now as the UN is documenting) shown is a tragedy. It might get much worse if one reflects on the rapidly rising prices for basic foods whilst the poorest are getting poorer. Awful things are afoot and should be lamented.