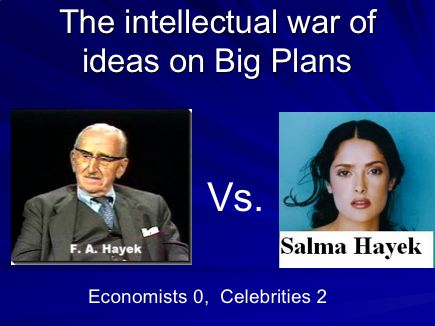 In an interesting post a day or so ago Ken Parish made this claim, which went largely unchallenged (though I’ve not read all the comments).

The need to avoid stifling innovation as the primary engine of capitalisms remarkable success was Hayeks principal answer to those who argued for socialism or even a strong social democratic welfare state.

Now the attribution of this view to Hayek is pretty irrelevant, as the debate can go on the merits of the proposition, rather than on the less interesting question of whether Hayek ever said that.

I was going to put this in comments, but wanted also to invite others to help me out so here’s a quibble.  I don’t think Hayek ever did say that.It’s certainly not his principle objection to socialism of which more in a moment.

It’s certainly surprising that he didn’t make this a more central part of his critique of socialism since his whole framework, his whole way of thinking about a market does suggest the importance of innovation and dynamism.  After all, like the person he might regard as the first of the Austrians – Adam Smith – Hayek built his economics within an historical framework in which order evolved by human action, but not by human design.

Thus he instances the emergence of currency (I think following Menger) as something that grew up in society as individual trades graduated towards a standard unit of currency.  The simplest example he gives is of a pathway in a field which is made as people walk along it – I think he even ties it back to the animal world in that way, since animals were doing this long before us humangoes came along.

And the way he sees the market is as a process, rather than a determinate mechanism in the way it is conceptualised in neoclassical models and their descendants.  But Hayek made his greatest theoretical contributions to economics in the 1930s and this was in the context of extending Mieses attacks on the socialists in the socialist calculation debate.

This was at a time before Austrian economics branched off as a distinct tradition in economics and Hayek was very much in the mainstream – and working at the LSE at this time.  And if you read his papers from that time, the issue he raises is not the dynamism of the market (perhaps people were a bit worried that the Russian economy was dynamic, it looked like it was as Stalin poured in the resources and dams and power stations rose from the earth.)

This schema pretty much does in the idea of general equilibrium as a useful concept and certainly makes it pretty unusual.  The toy economy that emerges from this is dynamic, but only in the sense that traders are forever adjusting their prices to changing levels of demand and scarcity, not in the micro-dynamic sense that is implied in Schumpeter’s idea of ‘creative destruction’.

Oddly at this time Hayek doesn’t even talk much about incentives – though if you think about it, it’s implicit in the idea that information that people have will be used – because they have an incentive to use it.  (Incentives play a stronger role in The Road to Serfdom I guess, but from memory these are mostly the political incentives that take the worst to the top.)

Later in The Constitution of Liberty, Hayek talks about the way Governments can stiffle innovation but at least from memory, largely in terms of the public standards that governments can get themselves involved in regulating – like currency and sale of goods regulation. This stifles the extent to which people can buck these standards and so initiate experiments.

All this surprises me no end.  Although much of Hayek’s interest was initially stimulated in the context of the debates about general equilibriaum in the 1930s – and these were not dynamic equilibria in any microeconomic sense in which entrepreneurs are engaging in ‘creative destruction’ as the economy chugs along – the entrepreneur argument was such an enticing string to his bow.

Now I have no doubt that some passage can be found where Hayek points to the increased scope that capitalism gives for experimentation and innovation in the production process as a good thing.  It is a good thing.  But I’d be intersted if any of the Hayek scholars out there can prove me wrong.  The first challenge is to find some passage in Hayek that makes this point in a vigorous way. The next challenge is to find some passage in which it’s a major part of Hayek’s thinking.  I won’t be that surprised if I’m wrong – as I say I’m surprised that I’ve never found such a passage myself.   But I’d be interested in any examples people can dig up.

This entry was posted in Economics and public policy, History. Bookmark the permalink.

3 Responses to Hayek and innovation