I fantasise about the day when the people who fancy themselves the champions of liberal capitalist democracy – you know the Business Class set – will realise that they are munching through the landscape and, as Schumpeter argued – following Marx – that they were undermining the very foundations of their good fortune. Looking at Inter State Dispute Settlement (ISDS) as enshrined in various (don’t make me laugh) ‘free trade agreements’ in which those in Business Class get to make judgements on how domestic law applies to foreign investors – rather than the institutions we evolved since Magna Carta to deliver the rule of law – they’ll say to themselves “Is it really a good idea to tear all that up to make sure we can keep tobacco brands safe from democracy?”

Likewise they might be wondering, in the light of the rise of people like Donald Trump, if the increasingly toxic brew of vox pop democracy to which the relentless drive for eyeballs in media has done so much to contribute, is such a great deal. Sure enough the befuddlement and endlessly wound up state of the electorate provides a way for vested interests to survive and prosper despite periodic elections to elicit the consent of the governed. But things are getting scary, and they’re getting scary quite fast.

There are plenty of occasions in which people warn that ‘the market’ won’t be pleased with one thing or another – one ‘signal’ or another that the electorate might send. Mostly it’s hooey. But the worrier in me senses more than a grain of truth in Anatole Kaletsky’s concerns about Brexit:

If Brexit wins in a country as stable and politically phlegmatic as Britain, financial markets and businesses around the world will be shaken out of their complacency about populist insurgencies in the rest of Europe and the US. These heightened market concerns will, in turn, change economic reality. As in 2008, financial markets will amplify economic anxiety, breeding more anti-establishment anger and fueling still-higher expectations of political revolt.

The threat of such contagion means a Brexit vote could be the catalyst for another global crisis. This time, however, the workers who lose their jobs, the pensioners who lose their savings, and the homeowners who are trapped in negative equity will not be able to blame “the bankers.” Those who vote for populist upheavals will have no one but themselves to blame when their revolutions go wrong.

Of course they may have no-one to blame but themselves, but something tells me they won’t be blaming themselves.

Then there’s Simon Wren Lewis’s musings on the Brexit referendum and the media.

[I find] it unnerving when, after typing ‘UK media bias EU’ into Google, one of my own pieces comes up on the first page. The gist of that (mid-April) post was if the broadcast media stuck to their ‘shape of the earth: views differ’ policy, our EU membership might disappear as a result.

What I took as given in making that comment is the partisan behaviour of the non-broadsheet press. In a more recent post I argued we should not take this as given. Martin Kettle subsequently spelled it out very well here. He wrote “Remain or leave? Politics or the press? The question on Thursday, just as Humpty Dumpty said, is which is to be master.” But is this kind of sentiment just a form of Guardian writer/reader transference: blaming the messenger of working or lower middle class views because they abhor those views? Is this, as comments on my own post suggested, just the tabloids reflecting the views of their readers?

Forget the straw man of newspapers telling readers what to do. The concern is not with which side newspapers formally endorse. It is about how stories are selected and portrayed. Like the recent front page story from the Mail about migrants in a lorry saying “we’re from Europe – let us in”. Except they didn’t say that. Incredibly the Mail is not the worst offender for putting stories like that on its front page, as the montage below shows (source @kwr66 HT @mehdirhasan). 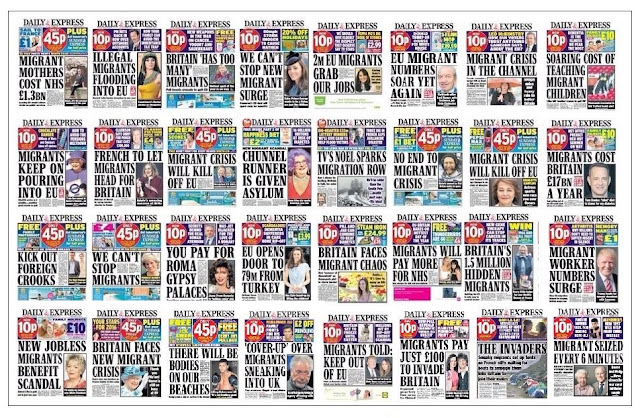 We need to find a way to ‘take back control’ of the means of communicating information.

However, whilst the idea that people are good judges is valid in some contexts, it seems assuredly untrue of the EU debate. There are three problems here:

– Voters are wrong about the basic facts. For example, they over-estimate the number of EU migrants in the UK by a factor of three.

– Some of their views are shaped (pdf) by cognitive biases. A form of halo effect has bred hostility to “elites”: because the Establishment has been wrong about many things, voters don’t trust them even when they correctly warn of the costs of Brexit. The post hoc ergo propter hoc fallacy means voters over-estimate the costs of immigration, and blame immigrants for problems caused by the financial crisis and austerity – a process perhaps exacerbated by the “bad begets bad” heuristic: voters unsettled by the uncertainty caused by immigration also believe immigration is bad for the economy.  And people’s tendency to take risks when they have lost can cause them to become reckless.

– Many voters are simply angry and spiteful. 61% say they’d accept a weaker economy as the cost of reducing immigration**. As Dan Davies tweeted, we are a nation of 60-year-olds in crap towns complaining about GP appointments.

The problem is that these defective preferences are systematic. It is those who have lost from economic and social change, or who feel discomfited by it, who aremost hostile to the EU.

Now, in saying all this I am not necessarily opposing referendums generally. In principle, it should be possible to have institutions which promote deliberative democracy, in which the public have a voice whilst ill-informed or nasty preferences are filtered out.

And here’s the thing, the institutions of deliberative democracy – such as citizens’ juries and assemblies chosen at random from the people – do provide a filter. I’m biased, and it’s hard to understand things out of context, but eyeballing the kinds of changes in people’s thinking before and after these processes seems to move people towards more sensible positions. Not necessarily more left or right – and sometimes clarity appears to emerge in various ways that one can imagine being portrayed as politically incorrect.

But ask yourself this question. If you’re a democrat – that is if you think democracy is the worst form of government except for all the other forms – and you’re told about any subject that people changed their minds after a deliberative process? Well people don’t change their mind all that often in the normal course of events. It usually takes a fair bit to get people to change their mind – and admit they were wrong! I’d say there’s a strong chance that the deliberative voting was something that better embodies the spirit of democracy than the voting before that process. And it turns out deliberative processes do produce substantial changes in voting. Here are two examples.

Here are the views of a group deliberating on Policies toward the Roma in Sofia, Bulgaria in 2007.

And here is a group of British people in January 2010 (emphasis added).

People are currently fulminating against David Cameron for holding the referendum to sort out a problem in his own party. I don’t feel that censorious. It’s easy for people to require politicians to show ‘leadership’ on issues that are important to them. But politics is a difficult business and appealing to the people seems like a pretty reasonable part of the repertoire. The real pity of it is that “the people” are different depending on how you engage them – on whether you expect them to vote sensibly with or without deliberation. It looks like deliberative democracy might offer some pretty worthwhile anti-bodies against the toxins that are spreading throughout the Western World.

32 Responses to Brexit and deliberative democracy